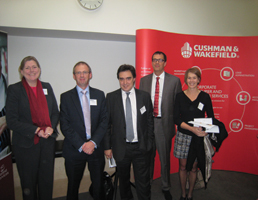 Norman Baker MP is passionate about alternative transport which he believes is inextricably linked to better use of offices.


It’s not often that a minister – in this case undersecretary of state for transport – takes a full hour to engage a public audience. He pointedly also threw down a gauntlet, daring people to change their travel and work patterns.

But what will a future city and its offices look like? Baker, the first speaker up on day two, said the future is already here but people are not grasping it.

Cities are headed for over-heating unless new ways of working and are adopted. "It’s a golden age for alternative transport, but it remains untapped,” said Baker. "Imagine Neil Armstrong getting to the moon but not able to land. Houston, we have a problem.”

London businesses, in particular because of next summer’s Olympics, must plan ahead to make the best use of all types of city transport during the expected busy period. That means making the best use of employees’ time at work, including options such as staggered working hours and more home-working.

Good examples exist of smarter working methods, Baker said. Around half the FTSE 500 companies claim to have cut their travel by 20 per cent in the past two years. The result is less stress on employees and more productivity.

Baker himself is doing more “remote speeches” where he sends videos of his presentation to conferences – perfectly acceptable to organisers and audience.

But browbeating organisations into changing their working methods won’t work. The problem needs more persuasion, he said. It’s no longer about cost or technology barriers. You have to change people’s mind-set. Everyone in this room has a responsibility for that.”

If, as a civil servant in the audience said, your manager has “lack of trust” in an employee who works away from the office, then you should point out the benefits to the organisation.

A lack of trust, an unwillingness to change is often based on fear, “and there’s a lot of it out there”, said Brian David Johnson, “the first, and only” chief futurist at Intel. Fear of IT is most often based on a lack of information and usually centres around security and privacy issues.

Don’t be afraid of the future – it will happen with or without you. Rather, “build your future. He recommends science fiction reading: “It gives us a language to have a conversation about the future. That means anybody can affect the future, so what will you do about it? I encourage you to have a vision and drive for it.”

As for the future layout of London, it expects 1.2 million more people by 2030. During the panel debate, architect Sir Terry Farrell downplayed any grand ideas of spreading out towards north Kent, especially the Thames estuary. Forget about any ‘New Heathrow’ on man-made islands and subsequent development of surrounding rural areas.

First, there is no need for it when some of London poorest boroughs such as Bromley are under-populated, said Farrell. Second, people want the amenities, history and excitement of a major city that is not pre-planned, but like London has had an evolutionary layered development over centuries. Layers of different uses in different geographical areas make London as vibrant as it is.

And don’t be too hasty about forcing people to work from home, said panel chairman and former Transport Minister Steven Norris. Playing the devil’s advocate, he said home-working is akin to “house-arrest” for may people and hot-desking evokes similar loathing.

But Norris also acknowledges the need for more flexible working methods, including staggered working hours. There is, said Norris, a time and place for it and some businesses have done well by it, such as law firm Eversheds.

Cornelius Medvei, chief executive of Eversheds, and on the panel, said the move to more flexible working and use of more technology, including video conferencing, has improved corporate performance.

A client’s team of lawyers is no longer based at a single office, but sits in the various offices around the UK and internationally. Hot-desking has not been an issue and lawyers are out more often meeting clients, which, Medvei noted, is where they should be. Transport for London, too, practices flexible working – and has for seven years, said panellist Iain Macbeth.

City offices, and those in London in general, will get smaller, said Phillip Ross, chief executive of consultancy Unwork. But the office can’t be written off, or downsized, totally. A recent study of large organisations by Unwork showed 63 per cent of employees still commute to work four to five days a week.

Only 1.6 per cent of employees in the study work mostly from home and only 12 per cent said they want to work from home.

But the ideal commute is 10 to 15 minutes, meaning there is a case for smaller offices closer to where employees live. There could be more working in the local community, said Ross.

Even in  five to 10 years, London building will get smaller because of the migration of data to data centres, thanks to cloud computing. Buildings will no longer accommodate large servers and the cooling equipment required.

The floor plates are flexible, to appeal to not only large corporations but also small businesses that need a single or partial floor, he said. Today’s employee in a major London office wants more natural light, window views, and concierge-level services along with high-quality food. But strategically, their floor plates must be quickly changeable.

Burnie noted that it will take time fill Heron Tower – only six of the 37 floors are occupied and three are being fitted out.

As one member of the audience said during the coffee break, the hard economic times may be putting a damper on moving into buildings such Heron Tower.
Also filed in:
Topics
News
Content
Professional Performance
Sectors