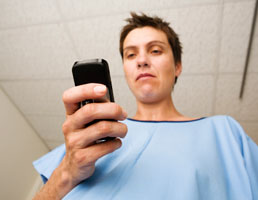 
Hospitals in England should consider allowing more use of mobile phones, according to new guidance issued by the Department of Health.

The updated guidance indicates that NHS trusts should consider giving patients, staff and visitors the widest possible use of mobile phones, where it doesn't interfere with equipment, the privacy of others or cause a nuisance.

"The working presumption should be that patients will be allowed the widest possible use of mobile phones in hospitals including wards" after risk assessments are done, notes the 2009 guidance.

But phone use should continue to be restricted in areas where critical care equipment susceptible to electro-magnetic interference is used.

The new guidance weighs in with legal considerations in the 1998 Human Rights Act that enshrine a person's right to a private life and to "develop relationships with other human beings and the outside world".

Health minister Ben Bradshaw said: "Close support and comfort from loved ones when you are poorly in hospital is essential. Mobiles phones are commonplace in everyday life these days and people have told us that they'd like to be able to use their phones more in hospital to keep in touch.

"That's why we're keen to encourage sensible use in NHS hospitals where it is safe to do so, in addition to other services offered in hospitals such bedside payphones, TV and internet access."

Decisions on appropriate usage of mobile phones are made locally by trusts and should take full account of the Medicines and Healthcare products Regulatory Agency (MHRA) recommendations on the safe use of mobile phones in hospitals.

Any trust allowing more mobile phone use could be letting themselves in for a risk assessment and monitoring nightmare, according to Martin Payne, Serco contract director at the trust Norfolk and Norwich University Hospital Trust.

"We don't allow any phones on the wards and the trust will likely keep it that way," he told FM World. "More than anything it's the therapeutic issue of disturbing people rather than any issue over interference with equipment.