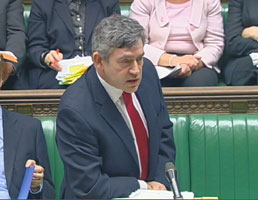 The Treasury is to bring forward a big-money rescue package for stalled PFI projects as long-term banking finance dries up.

In response to tough questioning at the House of Commons Liaison Committee, Gordon Brown said a number of times that the Treasury is poised to bring forward measures to stabilise the PFI programme.

Brown told the committee that: "while individual authorities may have questions I think you will find that the Treasury is working on measures by which existing PFI projects that some people think may be at risk can be secured".

PFI deals depend upon the ability of investment consortia to secure long-term loans, often of twenty or twenty-five years, from banks. The current reluctance of banks to lend long threatens to delay large-scale PFI projects at a time when the government is seeking to move them up as a means of injecting money into the economy.

The Treasury confirmed that it would be bringing forward proposals in two or three weeks, but was unwilling to release any details. Both The Times and The Financial Times speculate that the government will set up an "infrastructure fund" to provide bridging loans to struggling consortia. The projects would then be refinanced when the economy recovers and the banks loosen their lending terms.

Under this sort of funding arrangement, as well as taking on a greater burden of risk, the government would effectively be lending to itself.

Speaking on BBC Radio 4's World This Weekend the Conservatives and Liberal Democrats both expressed doubts about the desirability of continuing with PFI as the mechanism for funding capital expenditure if the government is obliged to supplement bank finance.

Philip Hammond, shadow chief secretary to the treasury, said: "If the private sector cannot raise the finance, if the public sector cannot assume the risk, then the government needs to go back to more traditional forms of procurement.

"If you take the finance out of private finance then you haven't got much left."

Rob Ball, professor of public sector management at Stirling University, a published author on PFI, also voiced criticism. "The whole justification of PFI is the transfer of risk - financial risks, spiralling costs etc. - to the private sector. This transfer of risk back to the public sector undermines the whole rationale for PFI".

Ball was, though, pessimistic about the prospects of forthcoming PFI projects without direct government aid. "I think they'll find that banks are very reluctant to lend. They won't want to set up these twenty and twenty-five year banking instruments. They'll probably come to a stop".

A spokesperson for Partnership for Schools, the government body that runs the Building Schools for the Future programme, insisted that the school building programme was on track. "Although these continue to be very challenging times, 2009 has started much more positively for BSF than many had predicted, with more than half a dozen banks indicating they are in the market to finance senior debt.

"With 50 schools now open, we are ahead of our delivery schedule for the current financial year, and to date, no construction works or school openings have been delayed due to the current economic climate," she continued.

"We are also exploring options for accessing shorter term debt (7 or 10 years) to fund schemes with a PFI component. Together with other mechanisms, such as split financial closes and early works agreements, these proactive measures are helping ensure that deals continue to close."