Ryanair launches onboard mobile use 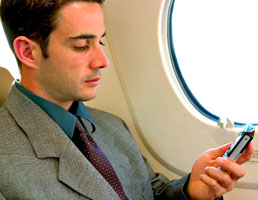 The service, provided by Swiss firm OnAir, will be rolled out to all of the Irish airline's 170 aircraft within the year.

Passengers on Ryanair's 20 OnAir-enabled aircraft can now make and receive voice calls at non- EU international roaming rates for 2 to 3 euro a minute. Text messages are 3 euro a minute and e-mailing costs 1 to 2 euro a minute.

Ryanair noted that the price tariffs are set by each mobile service provider and are subject to each customer's individual price plan. Ryanair is to spit the revenue with OnAir.

Passengers may use mobiles and any smartphone such as Blackberry. Calls are allowed once the plane reaches 10,000 feet.

The service will initially be available to 02 and Vodafone customers and to customers of over 50 other mobile phone operators across Europe. Discussions continue with other providers to sign them up to OnAir.

Ryanair chief executive Michael O'Leary, dressed as a mobile phone, launched the initiative at Dublin airport. He confirmed that the cost of setting the on-board capability was around £100,000 per aircraft.

He remains unrepentant about what critics have said is the destruction of the last mobile-free refuge. O'Leary is quoted in the Guardian on-line news service as saying he has "no patience with the Luddite approach" that says people shouldn't use their phones on an aircraft.

"You don't take a flight to contemplate your life in silence. Our services are not cathedral-like sanctuaries. Anyone who looks like sleeping, we wake them up to sell them things."

London (Greater)
Up to £47,276 per annum plus excellent benefits
Reference
59097
END_OF_DOCUMENT_TOKEN_TO_BE_REPLACED