Britain a nation of bed-workers 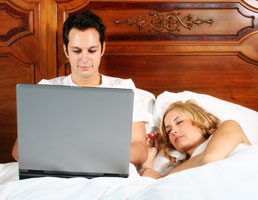 Over a quarter of UK employees are so work obsessed they will take a mobile device such as a laptop to bed.

Of those people who do work in bed, 57 per cent do so for between two and six hours every week, according to the survey by data protection specialists Credant Technologies

The majority of their "bed companions" found their partners' obsession with their mobile devices "a very annoying habit", noted the survey.

As well, 8 per cent of people admitted that they spend more time on their mobile devices during the evening than talking to their partners.

The survey laptop use in bed and the security implications was conducted among 300 city workers.

Almost half the respondents, 44 per cent, admitted they are holding important work documents on their mobile devices of which 54 per cent were not adequately secured with encryption.

Credant said that this should sound alarm bells for IT departments trying to secure data on the move. "Additionally snooping neighbours or even malicious infiltrators could hack into the devices that are being used in bed, as a fifth of people are not using a secure wireless network as they busily tap away under their duvets."

The most favoured way to connect to the Internet, and subsequently back to the office, while lying in bed is via a wireless network, according to 87 per cent. Almost a fifth of people use a wireless network that they know is insecure, with 56 per cent downing and uploading company information.

When staying in hotels, people are happy to connect to the hotel's wireless network, expecting the hotel to ensure it's secure. Half of respondents do so without considering security implications.

When asked what is the last thing they did before going to sleep, "it is reassuring to learn that, for 96 per cent of the people questioned, it is kiss their partners goodnight".