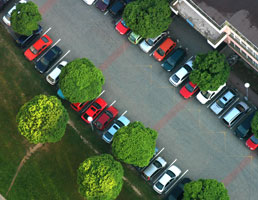 The introduction of Britain's first tax on workplace parking spaces has been delayed until 2012 in response to the recession.

Nottingham City Council will not now impose the £250-a-space workplace parking levy on businesses until April 2012. After negotiations, the Department for Transport (DfT) agreed to cover the revenue shortfall which would result from the delayed introduction of the charge.

A spokesperson for Nottingham City Council said: "Essentially what the Department for Transport is saying is that due to the economic situation at the moment it is better to delay charging until April 2012."

Under the proposals, businesses with more than 11 car parking spaces will be required to pay £250 a year for every car-parking space that they have. The Council expects to raise £10m annually during the first decade of the scheme. From October 2011 the licensing arrangements and the administrative structure for delivery will be in place.

The Council said that the decision was "fantastic news from our point of view".

Under the Transport Act 2000 local authorities are empowered to introduce congestion-charging schemes including car park levies. However, before raising revenue they are obliged to complete an application process managed by the DfT.

Business groups have been heavily critical of the principle of workplace parking levies. The British Chambers of Commerce (BCC) warned that the tax could ultimately cost British business £3.4bn. David Frost, director general of the BCC, is on record as saying: "If councils go ahead with this oppressive tax, companies and employees will be hit hard at a time when they least need it.

"There is a real risk that towns and cities will see firms refusing to invest and, in a worst case scenario, relocating elsewhere. This isn't a risk worth taking for a scheme which will not help reduce congestion."

The BCC has collected more than 6,000 names on a petition opposing the "stealth tax".