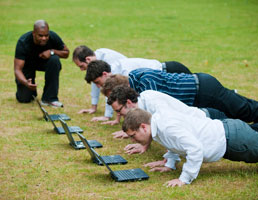 More than half of large UK businesses don't have an exact figure of how much it costs them to run their meeting rooms, a study has found.

"The Meeting Room Marathon - A Corporate Waste of Time" report, noted that 88 per cent of meeting room equipment users complain about the equipment.

The most unreliable technology is the projector, where 46 per cent of presenters have encountered problems in the past year.

However, according to IT managers, on average 62 per cent of all meeting room technology problems are caused by impatient users who make the problem worse by attempting some "self-service".

More than half of presenters reported trying to fix problems themselves before they call IT. Just more than 90 per cent of IT managers said these self-help remedies either make the problem worse or cause new ones.?

The average IT attendee's time wasted in dealing with equipment problems amounted to nearly three days a year, which is costing British businesses up to £25m.

The research surveyed 200 business execs and 100 IT managers in large UK companies.

Casio said it has produced a set of guidelines, available on their web site, to help people in charge of meeting rooms to "purchase smarter" as they face "the inevitable meeting room technology upgrade".