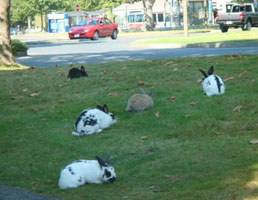 The relocation, as well as a cull, of rabbits from the grounds of a Canadian university is on hold thanks to an animal rights activist.


A legal team from the University of Victoria on Canada's west coast Vancouver Island, has asked a provincial court to set aside an injunction that has temporarily halted the school's rabbit management plan.

The facilities management team has long been trying to reduce the feral rabbit population, which they estimate is around 1,600.

The European rabbits - not native to Canada - are descendants of former unwanted pets let loose on the university grounds more than a decade ago. They can be seen everywhere, lounging on grassy knolls, hopping along paths, running around trees and looking for any handouts from students happy to share sandwiches and snacks.

But the bunnies constitute a safety and potential health hazard on the athletic fields by digging holes, as well as in other areas of the 400 acres, facilities management staff say. The rabbits also cause unsustainable damage to campus vegetation and property.

Their increasing numbers also mean they are migrating off campus and into the local community causing damage to people's gardens.

At the beginning of the year a pilot project was started to manage the rabbits in a humane fashion. The university was planning to put a large plan in motion during this summer's student break when fewer people are on campus. The plan, now on hold, includes the spaying and neutering of captured bunnies.

"We will direct our initial attention to the rabbit free zones to remove the feral rabbit population in those areas that are adjacent to our neighbours and where property damage and safety hazards are greatest," Tom Smith, the university's director of facilities management, said.

But the presence of the rabbits has become not just part of campus life - which the university readily acknowledges. The bunnies are also a cause celebre for animal rights activists, including former Green Party member Roslyn Cassels who brought the injunction to temporarily stop the management plan.

The university has appealed openly to anyone wishing to take a rabbit - or several - to get in touch. The university will cover the cost of trapping the number of rabbits that people or organisations want, and the bunnies will be turned over to them on the university grounds.

The provincial government's bureaucracy has also go into the act by requiring anyone or any organisation to obtain a permit to accept the rabbits, at a cost, of course.

"Both a general permit and an animal care form is required to be submitted along with photo documentation of the proposed accommodations, which illustrate the 'well being' of the animals, and their inability to escape," according to official documents.

The "cost of this permitting" is around £35. As well, would-be adopters of rabbits are told check with their local authority to make sure there are no local laws regarding the keeping of pets, in particular, rabbits.

One sanctuary has been approved to take 60 rabbits and the applications for three other facilities are being assessed by the ministry.

The British Columbia provincial Supreme Court will decide on August 27 whether to extend the injunction prohibiting the rabbit management plan.