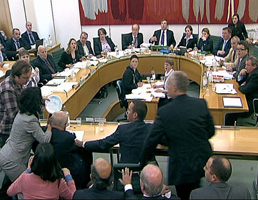 The head of City Security and Resilience Networks (CSARN) welcomed the announcement of an investigation into the breach of security surrounding Rupert Murdoch while he was giving evidence in Parliament.


The media tycoon was addressing a select committee looking into allegations of telephone taping by his organisation when a member of the public moved to throw a plate of shaving foam in his face.

Murdoch's wife and one of his lawyers stopped the 26-year-old man who was later arrested by police. Murdoch and his son sitting next to him were not harmed.

"The farcical sight of Rupert Murdoch being attacked within the Houses of Parliament turned an already embarrassing day for Britain into an excruciating international humiliation," said Richard Bingley, chief executive of the membership advisory body CSARN.

"It is not the first time high-profile individuals have been attacked in, supposedly, one of the nation's most secure environments. Judging by the apparent complacent ineptitude of those responsible for securing the facilities, members and guests, it won't be the last."

"We welcome the investigation," Bingley told FM World. "Citizens and taxpayers have a right to see people questioned in Parliament. But the solution is not, as was done, to throw out members of the public."

Bingley also cautioned against severe security measures that would put people off from attending parliamentary events.

"The public should not be vetted by some Byzantine pre-selection method for attendees that could all but wipe out the rights of many of us - those with recorded inconvenient political opinions, or simply a spontaneous desire to witness our democratic system - to attend."

Bingley said the Sergeant at Arms team and police presence "again got lucky" and no harm was done, "except by way of an appalling dent to Britain's reputation just months before this country is due to host the Olympics and Paralympics".

Bingley also questioned why "the House of Commons security were shamefully nowhere to be seen".