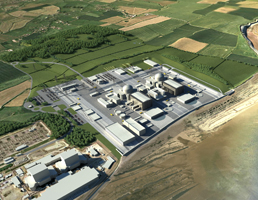 Plans are underway to build campus accommodation for more than 1,500 workers around the EDF Energy nuclear power station at Hinkley Point C in Somerset.


French state-owned power company EDF has been granted permission to commence pre-construction on the third nuclear power station on the Somerset coast of the Bristol channel.

It the first nuclear power station to be built in the UK for over 20 years.

EDF Energy has proposed a 510-bed accommodation campus to be built adjacent to the main construction site, five miles from Bridgwater.

A second campus, known as Bridgwater A, will house 850 workers and would be located to the north east of Bridgwater Town Centre.

Facilities on this site will include a canteen, a clubhouse with changing facilities, a large sports pitch and a bus terminus to transfer workers to the main Hinkley Point C site.

In addition, a third site called Bridgwater C will be built opposite the Bridgwater A site providing modular block accommodation for 150 workers.

The plan is to use this site for student accommodation on completion of the Hinkley Point C project in 2020, Angela Piearce, head of off-site developments told FM World.

Security teams will be appointed to ensure rapid and effective response to any on-site issues or incidents, a strategy document outlined.

"We will be looking for FM companies to provide services on all three sites," added Piearce.

"But it's still early days as proposals are still in development."

Main construction on the Hinkley Point is due to commence in 2012. An application for the main site construction will be made to the Infrastructure Planning Commission later this year. If successful, around 5,600 workers would be employed during peak construction of the new power station.

EDF Energy has set up a dedicated accommodation office to help workers. Local homeowners and hoteliers have also offered to provide rooms to rent for construction workers. More than 1,250 rooms in private homes have been registered so far, alongside accommodation in B&Bs, guest houses, hotels and static caravans.

Around 700 directly employed permanent jobs and an additional 200 contract staff will be created by the project, for more than 60 years, according to a statement.

The nuances of bullying revisited