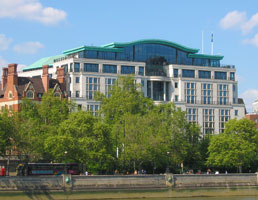 Property companies, hospitals and a cigarette manufacturer are among the UK's large energy consumers most ready for the Carbon Reduction Commitment, according to a league table.


The Environment Agency has published a table that ranks many of the UK's high-street names according to their readiness to manage their energy use.

But the first Performance League Table is not an indication of how well the more than 2,000 participating organisations manage their energy consumption. That comes next year, said the Agency.

The table ranks organisations on the steps they have taken to install smart meters and comply with the Carbon Trust - or equivalent accreditation scheme - standards of energy management, a statement from the Agency said. The objective is to be ready for the government's Carbon Reduction Commitment (CRC) scheme.

The Carbon Reduction Commitment scheme involves large businesses and public sector organisations that use more than 6,000MWh electricity per year - equivalent to an annual electricity bill of at least £500,000.

Organisations are ranked according to their preparedness to collect data and begin analysing it.

The league table shows that over 60 per cent of organisations have taken action by installing smart meters and obtaining a certificate for 'good energy management' from the Carbon Trust or other accreditation schemes.

The table also shows participants' annual carbon emissions - although they are not ranked on them this year.

From 2012, organisations' rank will reflect changes in carbon emissions year on year, both in absolute terms and taking the growth of an organisation into account.

"There's a lot of interests out there and we've advised more than 30 of the companies that will appear in the table," John Field, a director of energy consultancy Power Efficiency, part of Balfour Beatty, told FM World.

"It's because rising energy prices have pushed consumption to board level. Companies like to be ranked competitively to their peers and be in at least the top quarter."

But the real interest will begin next year when organisations are ranked according to their emissions and efficiencies, he said.

The table shows emissions in tonnes, but it ranks organisations on their 'Early Action Metric' as a percentage of what they could have done to be 100 per cent prepared for measuring their energy consumption and analysing it. Ranking for this first table is, therefore, regardless of emissions.

This year's table show many joint rankings, for example first place at 100 per cent.
The number one spot is shared by no fewer than 20 organisations, including British American Tobacco, CB Richard Ellis, Department for International Development, Keele University, OFGEM, Midland Quarry Products and Arena Coventry.

There are also hundreds of companies at the bottom of the table that have done '0 per cent', according to the table. These include London Zoo, XChanging, Wirral Council, Wiltshire Police, Yell Group, Sheraton Hotels and Peterborough and Stamford Hospitals NHS Foundation Trust.

Even though emissions reductions are not measured, Field said: "It's no mean feat to get up there in the first quarter of the table. It means they have a good foundation for data collection and management and to identify where savings can be made."

The table is based on the data reported to the CRC registry by organisations in their annual reports and the methods used to collate the rankings have been independently verified.