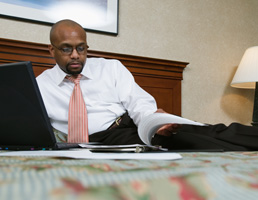 
Free WiFi or internet connection is the most valued amenity when choosing a hotel, according to 90 per cent of respondents in a recent survey.

The second most valued amenity, chosen by 60 per cent, is 24-hour security and reception desk support, according to the survey by Choice Hotels Europe.

100  hotel owners, operators and general managers from the UK, France, Germany, Italy, Switzerland and the Czech Republic were asked to rank what hotel amenities business travellers valued the most.

Just under half believed business travellers most valued a late check-in or early check-out facility and 37 per cent said an on-site hotel restaurant was most valued.

The least valued services were a business centre (33 per cent) and airport transfer service (18 per cent). At the bottom of the list was a fitness centre, voted valuable by only 12 per cent of respondents.

Choice Hotels International, based in the US, franchises more than 6,100 hotels, representing more than 490,000 rooms, in more than 30 countries and territories.