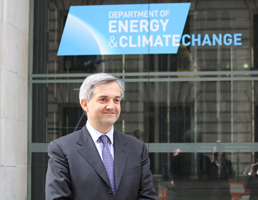 
The government is considering an appeal to the Supreme Court after another failed attempt to enforce its slashed Feed-in Tariffs (FiT) for solar energy.

The Court of Appeal upheld a High Court ruling that the Department of Energy and Climate Change's (DECC) attempt to cut the FiTs for electricity from accredited photovoltaic installations before the end of its consultation period had been unlawful.

But DECC remains in a fighting mood, according to a departmental statement.

"The Court of Appeal has upheld the High Court ruling on FiTs, albeit on different grounds," said Energy and Climate Change Secretary Chris Huhne. "We disagree and are seeking permission to appeal to the Supreme Court."

DECC will be discussing the possibility of appealing to the Supreme Court internally, a spokesperson told FM World.

The original plan was to cut FiT for all installations on 1 April. However, solar installations must first be accredited to receive the tariff.

Critics said the government moved the accreditation goalposts from April to 12 December (last month) even before its consultation on FiT and other renewables issues had ended. ?Any installation accredited after 13 December immediately received the new lower FiT.?? But last week, the government extended the period from 12 December to 3 March for newly accredited installations to receive the higher FiT. Even so, the FiT will be cut for all installations after 1 April, as previously announced.

The reduction in tariffs was taken to the courts by the environmental charity Friends of the Earth and solar installation businesses HomeSun and Solarcentury, with support by other installers.

Jeremy Leggett, chairman of Solarcentury, said the Appeal Court's ruling had been "historic" and should be welcomed by the entire renewable energy industry.


"Renewables can only play the pivotal role necessary to deliver a new green economy if we have a stable market and investor confidence backed by lawful, predictable and carefully considered policy," said Leggett.

"Today we have reminded government that it will be held to account when it acts illegally and tries to push through unlawful policy changes. We would much prefer not to have taken this path, but ministers gave us no choice. Our hope now is that we can work together again to restore the thriving jobs-rich solar sector that has been so badly undermined by government actions since October," said Leggett.


The BIFM has voiced concern over the FiT situation, as reported by FM World. The BIFM called for a "clear, consistent, long-term policy" to make the scheme work.

"The reaction to the first implementation of FITs showed that, given a clear investment signal, business responds and creates jobs and investment."