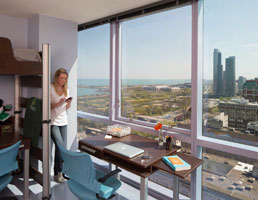 Students registering next year at Roosevelt University will be moving up in the world - literally - when it comes to on-campus accommodation.

Views from the Wabash Building - a temporary name - include vistas across downtown Chicago to out across Lake Michigan.

The blue and green glass 469-foot high building is America's second tallest academic structure after the 42-storey Cathedral of Learning at the University of Pittsburgh.

Floors one to five are for student services and include a recreation centre and a cafeteria with seating for up to 300. There are also university admission, financial aid and advisery offices.

The building also increases classroom space at the Chicago Campus by 40 per cent. Floors six to 13 house classrooms that seat from 36 to 108 students. Included are biology and chemistry labs and a mock trading room for Roosevelt's business school.

The 633 student beds, of which nearly 300 are in single accommodation units, are on floors 14 to 31, with the top floor housing building services units.

"All FM is done in-house, with the exception of janitorial services," a university spokesperson told FM World.

The university decided to build upwards thanks to a 2004 Chicago city fire safety regulation that required all student residences to have fire sprinklers by the end of 2008. Roosevelt University's 40-year-old 17-storey Herman Crown Centre held 300 students but was without sprinklers, and has now been demolished.

The fines arts building was demolished to make way for the Wabash building. However, the façade designed by Chicago architect Andrew Rebori is incorporated into the Wabash Building and is the main entrance for the university's bookstore.

General contractor for the project was Power Construction Company which started work in May 2010 and used three-dimensional computer-based Building Information Modeling for the design.

But the cost has been punishing, according to US media reports.

Roosevelt University, named after US President Franklin Roosevelt, opened in 1945 as a mainly commuter-oriented campus offering many part-time courses for local people.

The new building is part of the strategy to change to offer longer programmes that will attract students from out of town and state who will also need on-campus accommodation.

But that strategy was set just before the current financial crisis when the trend was for more out-of-town students.

Fewer out-of-town students means less money for the university which has limited donations from alumni, amounting to the squeeze on resources to pay for the Wabash Building, called such only because it stands on Wabash Avenue.

But for a tidy sum, it could be called something else.

"The university is actively looking for a person who would like to have the building named after them," the spokesperson said.

"Once that person is identified then the building will be officially renamed."