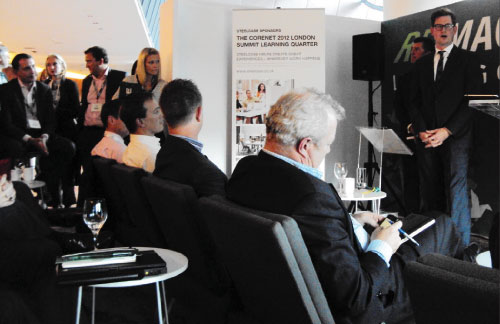 For the five hundred or so corporate real-estate professionals who assembled in London's Park Plaza Riverbank hotel in September, an opening session from Bill Benjamin on the power of 'emotional intelligence' and its impact on leadership development seemed to resonate throughout the rest of the programme.


Session leaders commented frequently on how relations between, IT, HR and marketing within CRE could be boosted by adding some emotional intelligence to the mix.

The summit, titled 'RE-Imagine: Re-orient, Re-ignite, Re-invent', encompassed everything from macro-economic factors down to the managerial issues invoked by the social media boom.

The structure of key performance indicators for property services was also discussed, with delegates speaking about the need for KPIs to include some "less formal" elements, driven less by metrics than "how it feels - does the level of service feel good to those receiving it?"
Some delegates suggested that CRE needed to be "better-educated about what procurement can bring to the process", and that not enough time was given over to this critical relationship.

Bringing it back home
The impact of 're-shoring' of production facilities also came under the microscope, in a session considering how macro-economic factors such as wage inflation in India and China was leading indirectly to Western manufacturers re-locating production back to Europe.

Wage inflation in the developing economies meant constant staff turnover and training, not just at the companies themselves but also the critical suppliers in their supply chains. Examples were given of companies like Philips and Adidas relocating production from China to the Netherlands and Germany respectively.

However, this re-shoring trend was dependent on sector, with service companies most likely to relocate back to Europe, and those with production facilities considering a trade-off with the cost of transport and other factors.

In a session which focused on the value of FM and the CRE function to the wider organisation, Barry Varcoe spoke about the results of CoreNet Global's year-long Corporate Real Estate 2020 research project. "Service providers who don't stick in silos, but instead give a broader perspective, will be the ones that do best," said Varcoe, who also predicted that the third estate [facilities used by mobile and flexible workers, but not directly owned by organisations] "will become a pro-actively managed part of an organisation's CRE ecosystem."

Looking ahead to 2020, Varcoe painted a picture of service providers moving ever-closer to their clients. "How will service providers adapt? They will consolidate even more; there will be greater alignment to make sure that procurement is integrated within the overall process; commercial models will become more value-based."

In a lively Q&A, delegates bemoaned CRE's typical status in an organisation and its lack of 'strategic enabler' status. "We haven't made a convincing case about how we add value to an organisation," said one. "We've shown that we address risk issues, but have we proved that we make a sustainable contribution to the organisation? No."

Another delegate argued that, "we will only become strategic when we can offer sustainable differentiation to the business."

Indeed, the question "how do we prove that we add value" was a constant refrain in this and other sessions across the two days.

In an brief discussion on flexible working, delegates discussed the cultural difference between Europe and Asia; in the latter, it was suggested, people were "much happier with hierarchical structures", and that, subsequently, the introduction of flexible working would need to be handled differently.

The social factor
Delegates had been invited to rate sessions via a specially designed 'app', and this being 2012 it was almost inevitable that the closing session would focus on the impact and value of social media.

In her closing session, Gina Schreck, president of Synapse Consulting, attempted to convert sceptics who believed that the 'noise' generated by social media had little relevance to their roles.

Most valuable was the open discussion about lesser-known social media tools, as delegates shared experiences about collaboration services such as Yammer and Atizo.