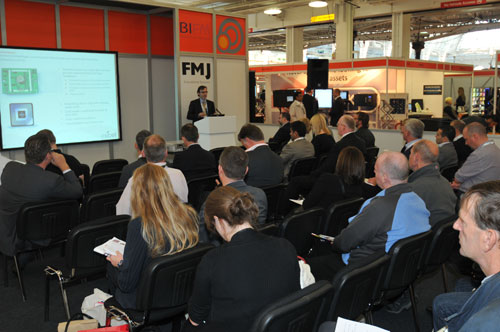 London's Olympia has been home to any number of variations on the theme of a facilities management exhibition in recent years. This year, organisers opted for a complete 're-boot,' calling it The FM Event and introducing a broader mix of networking optionsAt this year's CoreNet Global summit, delegates discussed, among other things, the need for 'emotional intelligence'.

The newly named FM Event was opened on Wednesday 10 October  by Ismena Clout, just two days after the BIFM Awards ceremony was held a few miles away at the Grosvenor House Hotel.


The BIFM chairman came away particularly pleased with the combination of learning
on offer. "Highlights for me included some great educational and networking sessions, and also meeting so many BIFM members," she commented.

Indeed, it was in the substance of the sessions that plenty of true value was to be found. In a panel session focusing on the impact of new rules on squatting, commercial property owners were warned to be on their guard against squatters who might previously have targeted residential properties, but would now be eyeing up
empty business premises.

Panellists welcomed the recent act that moved squatting in residential properties from being a civil offence to a criminal one; in the Scottish legal system, however, commercial property squatting is also now a criminal offence.

Ledford said that monitoring of Twitter postings had found references to empty commercial buildings and suggested that there could, in future, be a movement by rights groups to have businesses open up their empty commercial property as temporary homes for the homeless.
Two other panellists - Mark Cosh, director of SitexOrbis, and Lynne Swift, regional FM at CBRE Management Services - agreed with Ledford.

Cosh said there appeared to be a more detailed hunt by some people to find empty commercial buildings, especially if the property is near high-density residential areas with all the amenities that they provide.

The fear is that these people are not the usual 'urban warriors' who break in and take photos to prove they were there before leaving again. They could be eyeing empty property for longer stays, he said.

Regular inspections and maintenance - especially of doors and windows - remain the most effective measure against squatting, although nothing is 100 per cent secure, said Cosh.

Employability
In a session hosted by BIFM deputy chair Liz Kentish, panellists concluded that the value of experience was set to remain a critical determinant in facilities manager candidate selection.

The session, entitled 'Employability - what do organisations need from their FMs?', focused on the issues of technical versus general expertise and the take-up of qualifications in the sector.

It found that despite recent boosts to the FM qualification structure, experienced practitioners are likely to already exhibit the character traits demanded of a successful FM - and would thus remain in demand.

Said Kentish: "You can bring in someone with technical skills, but if they can't manage people you're going to have a problem straight away. Rarely do job ads talk about the desired attitude of the candidate required. Are you recruiting for personal values or just technical ability?"

Tom Robinson, training and development manager at Mitie Client Services, suggested that people long associated with the profession were now taking qualifications to act as a form of 'rubber-stamp' of their experience.

Mark Smith, regional director London at Telereal Trillium, warned that reliance on experience could lead to talented younger people missing out. "The trouble is that with so many applicants, qualifications are a good shortlist criteria. But they could be seen as something of a blunt instrument."

Don Searle, category manager at recruitment agency Catch 22, suggested that "the whole concept of an FM is changing slightly. Companies, certainly the larger ones, are looking for generalists not specialists. There's an accent on the management side of the title."

Tummel Vision
In a fascinating session that pretty much obliged us to use the above sub-head, workplace consultant Neil Usher introduced the concept of 'tummeling'.

'Tummel' is a Yiddish word, describing someone who gets others to get up and celebrate at weddings. "It's a skill and not everyone has it," said Usher. "Tummelers are people gifted with the ability to instil engagement."

The theory is that such people have an intentionally low-profile role in an organisation, quietly getting people to talk about key workplace issues. It's a subtle process of engagement, and in Usher's opinion missing from traditional communication.

"The whole notion is that a community needs to be stimulated and that with a change management programme it is not enough if you just expect it to work," said Usher.

FM and the economy
In a debate on how the UK's faltering economy has helped redefine the role of facilities managers, FMA chief executive Chris Hoar wondered aloud about "how much more there is to be outsourced anyway bearing in mind that the UK FM outsourcing market is the most mature in world". Hoar used the much-touted statistic that FM amounted to "between 5 and 6 per cent of GDP".

Chris Stoddart, outgoing facilities manager of the year, said that over the past 20 years FM had established itself as a recognised profession and demonstrated its value to the core business - "but we're still seen as the bad guys because we're seen as expense, not an income generator."

Paul Saville-King, MD of Norland Managed Services, said that he was "not sure that academic rigour in the sector is keeping up with demands and pace of change in the industry." He suggested that FM needed to go through the same process as HR had done years ago, moving from being 'back of house' to being "business partners, with the direct value of the service widely recognised by executives. There's a big gap there and a lot of work we can do to move that situation forward at a much faster pace.

"Our diversity is a really positive thing, but we've talked for years about up-skilling the industry - we've just got to pick up the pace. Until the change of pace demand side is slower than our ability to keep up, we've got a problem."