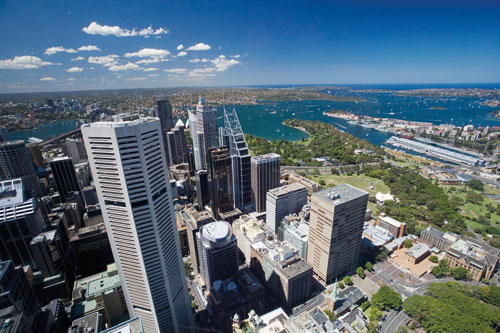 Conventional wisdom says that we should expect to come away from a conference with up to three new ideas - apparently, that is the maximum the brain can process efficiently at any one time.


I've returned from Australia with just one idea, but it seems to me to be pretty significant.

Looking at FM across the world from our home base in the UK, we inevitably make generalisations about what's going on elsewhere. Like all such generalisations, there may be some factual basis for our statements. However, much of the 'authority' lies simply in the repetition.

So this is what we know: the UK is the most mature FM market in the world; the US is very big, but still rather wedded to the single-service or out-tasking model; some of Europe and a bit of Asia/Pacific is making progress, largely in our footsteps; elsewhere, there are a few emerging markets - the Middle East, Brazil, India, China amongst them - that could eventually be quite big indeed.

But that assumption about the UK leading the world was looking smug and unreliable about 10 minutes into my first conversation with an Australian FM.

Australia's Facility Management Association (FMAA) was set up as an independent body in 1989, pre-dating the BIFM by a couple of years. Today, its mission 'to inspire, shape and influence the FM industry' is pursued through its Melbourne headquarters and a series of regional branches that gives pretty good coverage across this vast country.

Admittedly, its 2,000 or so membership looks a bit slim compared to the BIFM's 13,000 - but although Australia is big, its population is considerably below the UK's.


Familiar refrains
A brief chat with FMAA members produces a striking revelation, at least for a first-time visitor. In many ways, the UK and Australian markets are identical - with Australian FMs shaking their heads over the same issues and concerns: why isn't FM better appreciated as a key business discipline? How can we make this a career of choice? What should we do about training and qualifications programmes? Is our industry body delivering as we need it to?

FM is the same big, dynamic and often confusing sector in Australia that it is in the UK. The figures are different, of course, but there is no doubt about the maturity of the discipline. The total outsourced market is currently valued at about A$32 billion (£20 billion), made up of about 68 per cent single and bundled services and 32 per cent integrated services.

Interestingly, firms like DTZ and JLL have a big share of the market down under and integrated deals incorporating property services are common, as opposed to being fairly rare in the UK.

In Australia, therefore, everything (except the landmass) is scaled down in comparison to the UK. But there is a solid, well-developed market there, with a number of service areas tipped for future growth. There are also plenty of issues around which to build a conference.

Ideaction 2013, held 26-29 May, was the latest in an annual series that stretches back almost 10 years. Themes vary each year, as does the location - the FMAA has hit on a pattern designed to accommodate its potential audience as much as possible: the location alternates between the major cities (Canberra in 2012 and Sydney next year) and comparatively more remote regional venues. This year it was Hobart in Tasmania, Australia's smallest and southernmost state, which generally presents itself as a holiday destination.

The principles of this year's programme could easily have been lifted from a UK event. Building design and management issues; energy; indoor environmental quality; lighting; fire standards; compliance; risk management; BIM; the future of FM - it was all there.

If there is any criticism to be levelled, it would be that - as many of those headings might suggest - much of the content was driven by product and service providers. In addition, the future trends theme (which happens to be my particular interest) was mainly talked around rather than looked into in any depth. What we lacked, in that case in particular, was a chairman to push the speakers towards conclusions.

The opening plenary sessions went down well, particularly the first day's entreaty from financial commentator Jonathan Pain, whose message was basically 'forget all the negativity in the Western press and concentrate on growth and development in the Asia/Pac region'. That, Pain argued, is Australia's future.


On top, down under
Certainly, the commercial climate down there is quite different to the UK: Australia has weathered the global financial crisis relatively well - in fact, in Pain's view, the GFC (an acronym in common use in the region) has really been a WFC, raging across the Western world and offering other countries a clear indicator that the future may lie elsewhere.

There are two local concerns on the economic front: first, Australia is a comparatively expensive place to live and do business, and second, it's due for a general election in September. But the economy has been motoring on and business has been good for
FM service providers.

Overall, this event, too, must be declared a success. As one measure dear to the hearts of organisers, the great majority of the delegates (200 or so in this case) stayed on until the conference close.

What did I learn from the experience? Most importantly, we are wrong if we think that the 'mature' market of the UK needs to teach any basic lessons to the 'emerging' market in Australia. On the contrary, in this case, many more of the problems, issues and opportunities we see in FM are unique to the sector rather than unique to the country.

That suggests one potentially important opportunity lies in sharing information between these two parties, who are closer to being on an equal footing than many may realise.
Also filed in:
News
Content
Topics
International