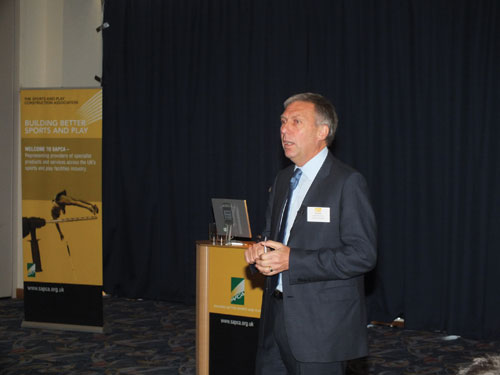 Last summer, London was a hub of excitement, spontaneous patriotism and record-breaking athletics. At this year's Sports Facility Show, experts spoke of how to protect this legacy at the nation's sports venues.

A year after the London 2012 Olympic games, is there any evidence to suggest our sporting facilities, both of Olympic-standard and at grass-roots level, are set up to aid future generations of stars?

These elements include the physical regeneration of east London and the Olympic Park, and the quality of facilities around the UK, linking both past and present, as well as London, with the rest of the country.

Both are built on the participation legacy and the growing reputation of UK business, through provision of facilities and services during the games.
"UK organisations should be doing their utmost to take advantage of the strong reputation the construction and services sector has gained," said Moorcroft.


Focus on people
Moorcroft emphasised the work of the people in sport, which he charatrised as a people-orientated sector. Volunteers are the cornerstone of grassroots sport and supplying adequate facilities will supplement their work, he stressed.

However, there appears to be, a clash between those who are urging every man, woman and child into their nearest sports club, and those expressing the blunt realism that the facilities are simply not in place.

The subsequent presentations at the conference, organised by the Sports and Play Construction Association (SAPCA) and held at Coventry's Ricoh Arena, were tailored to advise on increasing the longevity of sporting facilities and equipment.

Last month, the government announced it is to cut £11.5 billion in public spending as the country creeps back into a 'make do and mend' mentality. Emphasis is being placed on investing in maintenance costs in order to save on expensive reconstruction.

Chris Trickey, SAPCA chief executive, spoke of cost-effective solutions in renovating sports facilities. "If a renovation is planned," said Trickey, "do an assessment of what is already there, as it is an opportunity to tackle problems that time has revealed."

Items such as inadequate foundations, slow drainage or even fundamental aspects like poor orientation of courts and pitches can be rectified at one time, reducing any further improvement costs.

"Look at whole-life costs, not just initial capital costs," said Trickey. As much as FMs may wish to reap savings through efficient facilities, the cost of maintenance is still significant, it was roundly concluded.

In a number of the event's presentations, speakers bemoaned organisations spending big on 3G surfaces and new courts and pitches, but then taking a step backwards by scrimping and cutting corners on the correct maintenance equipment and procedures.

In a presentation on synthetic sports surfaces - an increasingly common sight across a multitude of sports in recent years - Nick Harris of Replay Maintenance continued the trend, quashing the myth that 3G surfaces were maintenance free. (Also see FM World, To-Do List on grounds maintenance, 25 April 2013). Bringing in an all-weather surface will certainly increase playing time and generate income, but additional wear and tear means it must be budgeted for.


Moving the goalposts
From taking care of lighting fixtures to upgrading equipment to satisfy changes to competition standards, the list of required improvements is periodically added to. For example, young football players from the ages of 11 to 12 are now to play in nine-versus-nine matches, on a suitable pitch size with a new size of goal. This equipment must be suitably updated and purchased.

A more sombre note at the conference was the stark reality that health and safety regulations on sporting equipment must be improved, after several cases of deaths through the use of unsecured or unsafe goal posts. It is another consideration FMs at these facilities must take into account.

Other speakers stressed the importance of designing and building multi-use sporting facilities as a means of extending the time the surfaces are in use. This strategy was evident in London's Olympic bid and preserving facilities for future use is an approach that Lord Coe and his team hope will be rolled out across the country's sporting arenas.

Odd that the conference was held at a football ground that was completely stripped bare of turf. Well, that's one way to save on maintenance costs
Also filed in
News
Content
Topics
International