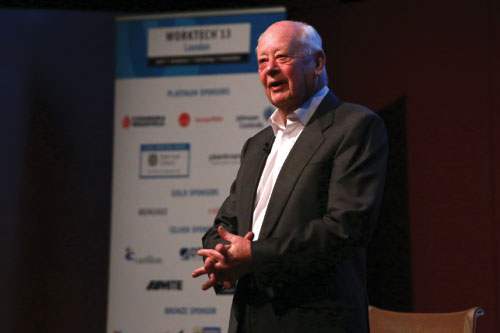 are the three key elements of the workplace. But how should organisations weave those elements together? That was the question at this year's Worktech conference in London.

In Ronald Coase's paper, The Nature of the Firm, published in the November 1937 edition of Economica, he examined why organisations exist.


His conclusion - that firms are necessary, justified and good for society - has been respected and widely referenced for the last 80 years; but today's working environment seems less fixed on the human element of business.

Writer and philosopher Charles Handy referenced Coase's work when he started his morning session at Worktech with an explanation of how the relationship between the individual and the organisation has changed significantly over the last 30 years.

"The idea of loyalty and trust comes from the company being paternalistic," said Handy. "When I went to Shell, the company interviewed my wife. But job security doesn't really exist any more; nobody is looking out for your long-term prospects."

The quotable Handy continued to illuminate his view that the world is changing, calling for firms to grow better, not bigger.

"Think of work teams like orchestras. When it works, adding a few more violinists won't make it better."

The rest of the conference continued along a similar theme: we may have more resources in our armour, but we need to learn how to use them effectively. And in an age where communication and technology is more advanced than ever, and its evolution accelerating at such an alarming rate (thanks for that, Moore's Law), the human element is letting the side down.

Tim Price-Walker, enterprise business consultant at Steljes, told the conference that workers waste two-and-a-half hours a week due to poor internal communication. Surprisingly, this was not down to an increase in flexible working.

The concept of worker performance being measured by pure output, rather than time spent sat at a desk, was discussed in an afternoon session on agile working. A considerable number of audience members raised their hands when asked if they worked at home - but only a small cluster of them would describe themselves as home workers.

Charles Handy sees the workplace a little differently. His view that our expensively constructed 'glass buildings' - beautifully crafted though they are - will be turned into apartment blocks in the future may sound a little dramatic, but it continued a trend throughout the two-day event that the traditional 9-5 role is gradually becoming obsolete.

Handy made the point that thousands commute into a city, central London or otherwise, to sit halfway up a skyscraper to be in the same building as the rest of the organisation's employees - only to send emails to someone a couple of floors away.

Before he could get the audience up in arms to completely bring down the capitalist regime, Handy welcomed individuals on to the stage to join him in conversation. What followed was a clash of sweet treats metaphors: the doughnut versus the macaroon. Only delegates will truly know the winner of that one.

A surprise inclusion at the conference was a talk on data and insight from Jim Newton, a director at McLaren Applied Technologies. Learning about the company's ability to receive and interpret Formula 1 race data from all over the world in its Woking headquarters, the audience was absorbed by how race decisions and strategies would be made in real time
in Surrey.

"Over 90 per cent of all data in the world is less than two years old," said Adryan Bell, director, workplace strategy and change, Global Workplace Solutions, Johnson Controls, who explained that the smart organisations use data to "anticipate issues and create opportunities".

Bell spoke of how rainfall and weather data has been combined to provide information on taxi availability.

"We are all data-rich, but insight-poor," continued Bell.

"We can collect more data, but we don't always know what to do with it."

The reality - as with anything new and with so much potential power - is that it is still down to the human brain to interpret, analyse and devise a strategy.

Duffy on digital
How do you justify place in a virtual world? And what can place do that electronics can't? These were the themes addressed by Frank Duffy, founder of architectural design practice DEGW and former president of the Royal Institute of British Architects.


During his presentation, Duffy often sounded genuinely astonished at the march of the digital world, the consequent impact on workplace design, and how a resultant increase in mobility within and between workplaces was allowing for universal, instant inter-connectedness that his profession needed to respond to.

Duffy also presented examples of offices designed so that there is "no hierarchy in the infrastructure". He foresaw a future in which, if businesses are procuring services as much as space, those services would be paid for by the hour in much the same way that space is paid for by the square foot.

Architects, suggested Duffy, could be "too much in love with what we do, as serial purveyors of new buildings". The construction industry needs to break away from the "tyranny of the supply chain", and those operating in the arena of architecture through to workplace design needed to be "much more critical and imaginative".