Standing on the BIM cliff? 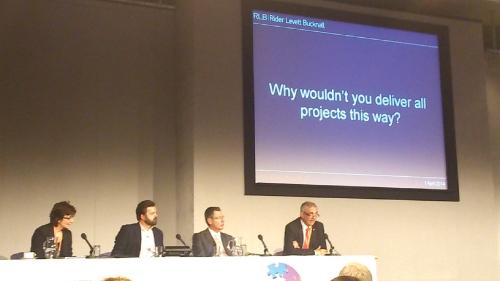 One of the themes addressed at a Government Soft Landings conference in Westminster last week was how building information modelling (BIM) should be mandated for organisations in the FM sector.

Representatives of interested parties from across the construction and facilities management spectrum gathered last week for 'Government Soft Landings: Joining the Dots' at the QEII conference centre in Westminster to hear speakers exploring how to bring facilities and asset management together, connecting asset data, commissioning, training, collaboration and post-occupancy evaluation.


The event, supported by the Cabinet Office, the Department for Business, Innovation & Skills and the construction and FM business BAM, was perhaps unusual in focusing specifically on FM's involvement in the BIM/ GSL chain. Certainly, there is no shortage of BIM-related events elsewhere across the spectrum of construction professions.

Themes under discussion included the need for FM contractors to engage more fully with the rest of their construction project partners and for post-occupancy evaluation to be as much about the evaluation of data from sensors as it is surveying of building users.

It's an objective of the government's construction strategy to align the construction and design sectors with those that use, operate and maintain the buildings. Deborah Rowland, head of facilities management policy and strategy at the Cabinet Office, started the day by emphasising that it was important to acknowledge that "GSL and BIM go together".

Rowland was followed by the government's chief construction adviser, Peter Hansford, who pointed out that GSL would be an obligation in all new central government projects by 2016.

"The ongoing maintenance and operational cost of a building or asset far outweighs the original capital cost of construction," he said. "GSL identifies the need for this to be recognised through early engagement in the design process; in this way, GSL contributes to the government's cost agenda." Hansford claimed GSL was on its way to being embedded into the procedures of government departments along with BIM.


Time to get involved
Kath Fontana, managing director of BAM FM, spoke about how BIM and soft landings would lead to 'a better user experience.' Over the next five years, she said, everyone in FM would need to get their heads around BIM and how to use it - something which would require the sector to take the initiative, said Fontana.

"We have to recognise that FM has to change too, both through contract and process changes," she said. "There's a responsibility on FMs to go out there and learn new things. We have to 'lean in' a bit and learn some processes as well as promote our own part in the chain."

Architect Paul Fletcher put forward the view that "almost every other aspect of our life is about service now; the aeronautical industry doesn't buy planes, it buys service. We need a thorough systems approach to understand the impact we have on outcomes."

Fletcher, presenting as part of the morning Pecha Kucha session, said that all involved in construction should "stop thinking as a construction industry and start thinking as a built environment services industry. If you always think in terms of construction, it's always going to be about buildings."


Networking
At the tail end of the event, Deborah Rowland announced that the government was planning to integrate GSL clauses into the facilities management contracting model that is still out to procurement.

Later, Rowland told FM World: "GSL is part of the BIM Level 2 mandate for all government construction new build and refurbishment projects - so it's in that package which is mandated for 2016. We are also currently working on how we embed GSL into the new FM Contract model and into future construction frameworks to ensure that GSL is supported. The model will go through procurement this year, so we're working on that now."

Earlier in the day, BAM's Kath Fontana had called on government to mandate BIM for FMs to encourage them to use it otherwise there was a threat that FM would "fall off the BIM cliff".

Mike Packham, representing the BIFM and speaking about the part played by training in BIM and GSL, agreed that BIM should be made mandatory for FMs.

He told delegates: "If the government mandates BIM for FM that will give it the push it needs."

Ed Baldwin, a partner at built asset consultancy EC Harris, said FM was far behind other sectors in this regard and needed "to up their game".

"We are in an immature FM market and an under-invested practitioner base," said Baldwin.

"The market is reluctant to make significant investment required in terms of software purchase," he pointed out. But he said that the use of a BIM-integrated CAFM system would enable FMs to meet the client need for better real time information flow and standardisation of operational data. Baldwin added that BIM had until now only focused on design and build but that the integrated BIM FM market "was just emerging".

"The need to innovate and continuously improve is vital to the success of the facilities management industry. Organisations will need to exercise a degree of vision in seeing the benefits that BIM should bring."

David Philp, head of the BIM Task Group, envisioned the future for BIM and GSL. He said the BIM level 2 framework that was launched last month provided information on how to use BIM, such as visualisation and lifecycle solution testing at pre-construction stage, among other benefits.

Philp said this meant in the future with Level 3 BIM it may well be possible for cost models to be quickly derived from the BIM model through the use of new costing interfaces. Given the increasing digitisation of tools and technology, Philp also suggested the need for FM to have new role models for a digital generation.

He also proposed the idea that flying robots could be used to carry out BIM work while receiving commands wirelessly from a local control room.

Delegates also heard how BIMs would reduce the risk of poor operational data transfer when client organisations move from one FM contractor to another.

"Every three years, FM contracts turn over and operational data held by the outgoing contractor is returned to the client," said Kath Fontana, managing director of BAM FM.

"I would be amazed if someone with the incoming FM contractor didn't point out the risks involved in that data set."

The incoming contractor will then want to do a re-survey of that data, said Fontana, invariably leading to a higher contract price.  In a show of hands, Fontana was also able to get the vast majority of delegates to accept that they did not have complete confidence in their asset data.

With the need for property asset management 'champions' also discussed, FM's role in maintaining BIMs and promoting GSL should be pivotal. It just needs the FM sector to ensure that it happens.