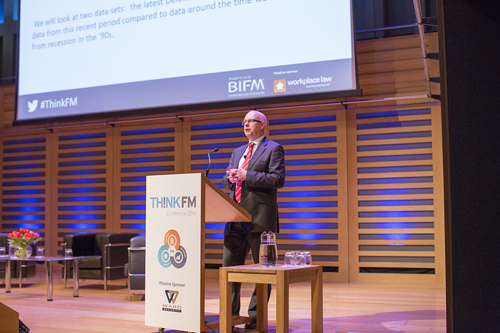 Could the economic upturn bring fresh opportunities for FM to move away from being perceived as a cost centre to take a place at the top table?

FM has gone through a period of rigorous cost-cutting as a result of the long recession, which, suggested the speaker, did not impact as much on organisations as many working within facilities management might have envisaged.


This suggests that FM has been viewed in recent years as simply a cost centre, but now that the economy is picking up there may be some fresh opportunities for the sector to get its seat back at the top table.


FM at the top table
At last week's ThinkFM conference in London, Guy Palmer, director at Deloitte, took as his source a regular survey of Coos (last published in March) and a survey first taken in 2009 that looked at the long-term impact of the last recession.

Palmer revealed that over the past few years organisations were looking to reduce costs, which generally meant there were reductions in FM delivery standards.

"Have we squeezed FM so hard that the business pips are squeaking?" he asked, or did businesses even notice?

In fact, he argued, a lot of organisations didn't notice the cost reduction activity that the FM business has done, so perhaps there were ways FM could have got there sooner.

"This indicates that something we might reflect on coming out of the recession is the old argument in FM that we need the high standards because it impacts directly onto the business."

Whatever the reality, he said, now is the time for FM to make a more convincing case to be allowed back to the top table and to being viewed as a value add position rather than being seen as a massive cost reduction target.

"We've heard a lot in the last few years about partnerships and that's why we need to find more constructive ways of working than just straight cost reduction.

"So this is the moment that FM can position itself to support and enable the business expansion that's going to come in the economy rather than just been seen as the cost target."

This could come with FM working harder to innovate to support the business expansion, which will undoubtedly come with the end of recession. It also means working more closely with other disciplines - HR, IT and of course procurement, which has made great inroads in recent years.

Finally, he said, there is the growth of Big Data, which FMs can use and take higher and higher up the value chain to help illustrate what FM is doing to add value to a business.