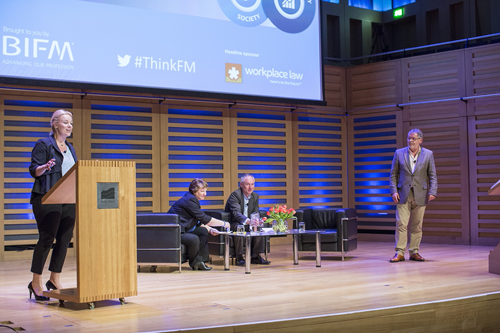 Barriers between those who focus on people and space must be broken down in order to better support the organisation.

Chris Kane was in a buoyant mood at the ThinkFM conference last week.


Joined on stage by session facilitator Nigel Roberts of Strategic Media Intelligence and Caroline Waters of CW Consulting Box, the chief executive for BBC Commercial Projects was leading a crusade to combine the effects of good space for people to thrive in.

The debate centred on how to break down the divisions between HR and FM. The first slide, which proclaimed that 'Silos were for Dodos', suggested that this is a process that is already in full swing.

"Barriers are built by culture, society, history - and frankly, all of that is now irrelevant," said Kane. "We're here to do the best thing for the organisation we support. I believe we can do a lot better."

One-third of the audience raised their hands when Roberts asked the audience if they had ever worked in a toxic office, suggesting change is necessary.

Waters joined the discussion from the HR side, suggesting that adding value can only come about from there being an aligned strategy between the two departments.

"Chris (Kane) talks about it being a fragmented industry, but is there a fragmented purpose? You've got HR folk focusing on the people and the value of people, but the real asset is what you can create when you put the right people in the right spaces and optimise their performance.

"We have to connect or we won't create any value for the businesses we are supporting."

Kane called on FM to "get its act together" in order to have a greater say in shaping what is a continuously changing workplace.

"We need to stop talking and to take our place in the ecosystem of work."

Kane played a significant role in igniting the collaborative partnership between the BIFM and the Chartered Institute of Personnel and Development (CIPD) which was announced at ThinkFM.

"BBC's Media City allowed FM to experiment with working space. It's been a big success and we saw an increase in creativity," said Kane.

He explained that both bodies will work on a number of research and insight projects over the coming months that will investigate how both communities of professionals are evolving and adapting to the changing workplace.

The response to Kane and Waters' comments was roundly positive. Time for talking the talk has finished. It's now time to walk the walk.