The changing face of the workplace 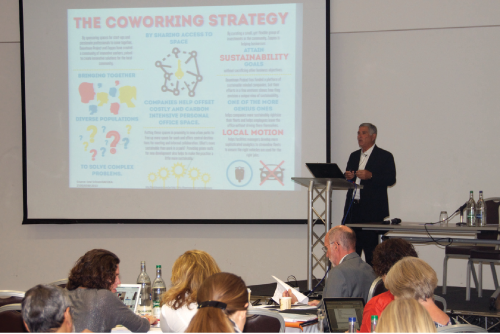 Held at the University College London's Wokefield Park facility, this year's summit had as its theme "innovation on the edge".


It featured academics and experts in the fields of FM and real estate discussing the most recent ideas to emerge in workplace strategy.

The event, supported by the International Facilities Management Association (IFMA) and BIFM. Attendees heard from and engaged with the presenters and other attendees from around the world in discussions on a range of issues related to work and the workplace in the 21st century.

Professor Franklin Becker of Cornell University - known as one of the "founding fathers" of FM - began the conference by extolling delegates to consider an obvious truth: You must do your research.

Too many companies were basing their workplace strategies on "fads" that are popular with other businesses rather than properly testing what their needs may be, said Becker.

"Much of what passes for workplace strategies are better described as part of the world of fad and fashion," he continued.

Rather than adopting ideas popularised by companies like Google, without proper thought, organisations needed to carry out a more rigorous mixture of academic and practical research within their organisations on how workplaces should be designed, said Becker.

The American academic told attendees that they had to "test, not guess" what worked for them. Workplace design should be based on a system of various interrelated factors unique to each company such as technology and employee needs.

"The fundamental premise of evidence-based design is straightforward," he continued. "Better designed solutions, ones that are more likely to support valued outcomes, will result from using the evidence generated by high-quality, formalised and rigorous research processes."

Becker cited the causes of a delay in transferring patients to a C-section operating theatre in an American special care nursery as an example of how more joined-up FM could even save the lives of children and mothers. He explained how the Cayuga Medical Centre in New York cut the time it took for staff to carry out simple procedures such as finding the keys to the medication room or mixing antibiotics through a combination of better teamwork and communication.

Lukas Windlinger, of Zurich University of Applied Science, presented research about spatial environments, job design and sustainability in the UK for the first time. He said that satisfaction, health and work performance could not be explained by spatial building parameters but depended on users' perceptions - perceptions which had to be tapped into in much more depth by companies, and which represented a recurring theme throughout the whole event. Windlinger concluded that users had to be more informed of what was available to improve their workspaces. For example, he said: "Occupants care for environmental issues, but are not aware of the possibilities to do so." Integrating the purpose of a job with how an employee would carry it out in a workplace, he said, required "close co-operation/collaboration with HR and business lines/units".

Creating a much more people-focused workplace seemed to be the most pervasive theme of the conference. Chris Kane, CEO of BBC Commercial Projects, said that the workplace strategy sector had to embrace change and build bridges between the "people" side of the business and the "place" side with other workplace specialists - otherwise the industry "will become as dead as a dodo". He said: "It is no longer about servicing buildings or people contracts, it's about enabling people to deliver greater agility, creativity and innovation."

Frank Van Massenhove, president of the Belgian Federal Social Security Service, has been credited with creating a revolutionary workplace at the headquarters of the Belgian Social Security Ministry in Brussels. He regaled delegates with the vision of a workplace in which employees would get to choose their bosses rather than the more traditional paradigm of employers picking workers.

Co-working was another popular theme, with some talking about how co-working space could trump the need for traditional offices and radically change the role of the FM, if not obliterate it entirely.

New York-based workplace expert Melissa Marsh, CEO and founder of Plastarc, went as far as to tell delegates that the primary role of most FMs in co-working spaces of the future would be of "making communities and enabling people".

She said co-working spaces were "a new form of commercial space that filled long-existing needs" and the new generation of FMs would encompass "a holistic role of events organiser, tech liaison, knowledge manager and facilities expert".

More philosophically and generally, Christina Danielsson from Stockholm University, speaking on the Workplace Trends panel, said that companies should tap into the lessons of failure, and not fire employees who failed at certain tasks.

"We are not open about failure, but it is a basis for a lot of knowledge and can help a company devise a workplace strategy," she said.


Mission to Mars
With a demographic time bomb still a key issue for FM, IFMA was enthused to be talking about its Mars City Project, which seemed to hint at the "grand vision" the organisation has for the profession's future. The project is an IFMA-accredited learning tool that is to be piloted in the US with rollout being also being considered for Europe. The Mars City project will be piloted in selected high schools in California, Virginia and Pennsylvania, possibly in areas of high youth unemployment.

Nancy Sanquist, IFMA fellow and trustee of the IFMA Foundation, said: "At the least we want to get [young people] out of high school with a technical qualification and at the most we want them to go on to advanced degrees in FM."

The tool could help students gain qualifications for technical jobs such as plumbing to roles that involve devising workplace strategies, said Sanquist.

Plans to take the initiative to Europe are still in development. Erik Jaspers, head of Planon, a product strategy and business innovation at FM and real estate software firm, is aiming to implement the plans in Europe.

"We will have to build a minimal infrastructure here in Europe," said Jaspers.

"The tool could help to get more women into the technical trades, so early engagement of people in schools is a good idea. That's important in every area of the West," he said.

Jaspers added: "In some areas like the Netherlands there is a surplus of FMs, but there's a deficit in America. So we are thinking about whether we can globalise this profession to give young people the opportunity to work in America and come back."

There are also plans to take the programme to India and China. "We have a grand vision," said Sanquist.

The project highlighted the major role that technology and 'gamification' is likely to play in the future of the workplace and FM. It will be interesting to see whether the financial resources necessary to bring these initiatives to fruition are forthcoming.