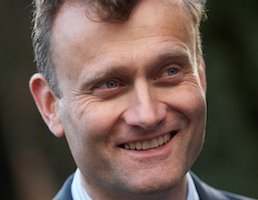 Hugh Dennis has been confirmed as the host for the 2014 BIFM Awards.

Hugh Dennis is a popular and highly sought-after awards host, comedian, actor, writer, impressionist and voiceover artist, best known for being one half of Punt and Dennis with comedy partner Steve Punt, and playing Pete Brockman, the father in the BBC One sitcom Outnumbered.

He is a team captain on BBC Two's hit topical panel show Mock The Week - having appeared on every episode. He also writes/presents Radio 4's award-winning comedy The Now Show. In 2011 he became the host of new comedy-improv sketch show Fast & Loose. He has guest hosted Have I Got News For You and played obnoxious GP Piers Crispin in BBC sitcom My Hero.

Hugh was a member of the Cambridge Footlights, but after university worked as a brand manager for Unilever for six years. However, with Steve Punt, whom he met at university, Hugh continued performing comedy at venues including London's Comedy Store.

While establishing himself on the comedy scene, Hugh turned a natural flair for impressions to better use and got a job providing voices for Spitting Image. From this Hugh became a regular guest on the Jasper Carrott Show and in 1985, along with Steve Punt, formed half of The Mary Whitehouse Experience on BBC Radio 1, later graduating to a television series.

The live music will come from 'the Lionels', The Lionels are a four-piece band based on the South Coast. The band have been together for over five years and have a simple approach, which is that if a song doesn't keep people on the dance floor, it doesn't get played!

There will also be the option to attend the popular Charity Casino after the awards ceremony has closed.

The BIFM Awards are a highlight of the facilities management calendar, when more than 1,300 guests attend to see the best individuals, teams, projects and organisations recognised for all that they bring to the profession and the wider business community.