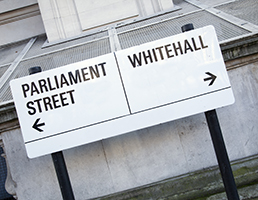 Francis Maude, Minister for the Cabinet Office, has announced plans to reduce the number of government buildings in central London from 143 in 2010 to 23 buildings shortly after 2020 and relocate a number of workspaces to London suburbs.


The plans have been published as part of the Government's Estate Strategy, which outlines a series of measures to get civil servants working more effectively, foster economic growth, and save billions for the taxpayer.

These measures include moving departments away from expensive Whitehall accommodation and into the wider London boroughs. Existing successful examples include areas such as Croydon, where the Home Office runs a major satellite office and the Ministry of Justice is trialling a mini-commuter hub created by the Cabinet Office.

It is estimated that moving half of London civil servants away from Whitehall could save taxpayers billions by 2030. For example, it costs £35,000 a year to base someone in the Ministry of Defence headquarters in Whitehall, compared with £3,000 at the UK Visas and Immigration offices in Croydon.

The government is therefore working with local authority partners to assess a number of new location options in the suburbs, including areas such as Stratford and Croydon, in a move that would bring further growth and regeneration to these areas.

This government also commits to the further disposal of inefficient government buildings in London and across the country and opening these up to the market. So far the number of government buildings in the capital has been reduced from 143 in 2010 to 71 today. The government plans to further reduce this to 23 buildings shortly after 2020. Departments will continue to co-locate in order to deliver more integrated and customer-focused services.

Maude said: "As part of our long-term economic plan this government is cutting waste to save taxpayers millions. Since 2010 we have got out of property 26 times the size of Buckingham Palace and halved our government buildings in London. Hard-working families expect us to do more and we will - shortly after 2020 there should be just 23 government buildings in our capital, releasing surplus space for housing and businesses."

Other initiatives announced include: central and local government bodies reinvesting the money they secure through property sales to incentivise further disposals; publishing better information and advanced notice about possible sales; charging departments for freehold property to guarantee they squeeze the most value out of every site; and reducing the average target space for each employee from 10 to 8 square metres by the end of March 2018.

These new initiatives come against a backdrop that has seen the government already vacate 1,650 sites across the UK since 2010 - a reduction that has saved more than £600 million in cumulative running costs since 2010 with £1.4 billion raised in capital receipts for the taxpayer.