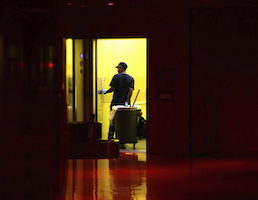 Three working groups have been formed to push forward measures encouraging cleaning firms to fulfil their duties to workers, FM World has learned.


This follows recommendations made in Invisible Workforce, a report published in the summer by the Equality and Human Rights Commission (EHRC).

It revealed that employers in the commercial cleaning industry are failing to meet their responsibilities to their staff. One of the report's recommendations was the creation of a task force to ensure that changes were made.

At a recent meeting task force members oversaw the formation of three 'working groups' that will tackle particular areas that the report indicated were problematic.

One group will handle 'responsible procurement' within the industry and will be chaired by Guy Stallard of KPMG. Its aim will be to ensure that procurement practices take into account the working conditions of cleaners.

The second working group's focus will be to explore ways to make sure workers are treated with more respect to counter their feelings of being the "lowest of the low" - a common feeling highlighted by the EHRC report.

It will look at how managers and clients can be supported and informed about how to treat workers better and will build on "existing good practices, toolkits and fact sheets". This group will be chaired by Sarah Bentley, chief executive of the Building Futures Group.

The third group will be chaired by Scott Hill, HR director at Interserve. It will focus on raising the awareness of employment obligations and workers rights such as entitlement to holiday and sick pay, which some cleaners were not fully aware of owing to certain barriers, as revealed in the EHRC report.

All three groups will meet separately and devise ways to concretely follow through on their aims before reporting back to another task force meeting in November.

Alice Teague, programme head of employment and economy at EHRC and author of the Invisible Workforce report, said: "We wanted the working groups to be chaired by those in the industry already."

Teague added: "A lot of good work is already going on and we are not looking to duplicate it, but to build on it."

The EHRC report comprised three documents - an overall findings report, but also two separate research reports. One of these reports consisted of 93 interviews with cleaning operatives presented as case studies. It showed that many cleaners felt that their employer, client firms and the public do not treat them with the dignity and respect everyone should expect on pay, holiday or sick leave or dealing with their concerns.

The report recognised that procurement and contracting of services is a "significant feature" of the commercial cleaning industry. Researchers concluded that this "appears to have contributed to the prevalence of low pay, high levels of labour turnover, and the challenges for successful organisation by unions within the industry".

Other conclusions in the report showed that while there were many examples of good employer practices, many cleaners spoke of being spoken to rudely and treated badly.

Many cleaners reported problems with under-payment or non-payment of wages. The report identified examples of workers being sacked for complaining about not being paid in full and on time.

Migrant workers' lack of awareness of employment rights and poor language skills left them vulnerable to mistreatment. In some cases employers wrongly told permanent workers they were not entitled to paid holiday or sick leave.