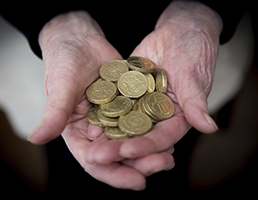 Some 5.28 million people are paid less than the Living Wage, according to latest research published by professional services firm KPMG.


It indicates that 22 per cent of employees now earn less than the Living Wage - up from 21 per cent last year.

Although the rise sounds modest, in real terms it equates to 147,000 people.  The data also belies a worrying trend that sees part-time, female and young workers as the most likely to earn a wage that fails to provide a basic but decent standard of living.

The research, conducted by Markit for KPMG, shows that the proportion of people earning less than £7.65 an hour (or £8.80 in London) is much higher among part-time workers.  More than four in 10 (43 per cent) take home less than the Living Wage, compared with 13 per cent of full-time employees.  Despite accounting for less than a third of all UK jobs, there are also more part-time roles paying less than the Living Wage (2.98 million) than full-time jobs (2.29 million).

More than 40 years after the first Sex Discrimination Act was passed, the research also finds that women are more likely to be paid below the Living Wage than men.

This year's data shows, for example, that one in four women earns less than the benchmark, compared with 16 per cent of men.  It's a figure that has stagnated over the past 12 months.

Even where wages have increased, men earning less than the Living Wage have been awarded an average 3 per cent increase, compared with 2.7 per cent for women.

Although the number of young unemployed continues to fall, it is clear from analysis of the data that younger workers remain the most likely group to be caught in the 'working poverty' trap.

Some 72 per cent of 18-21 year olds are currently earning less than the Living Wage, compared with just 15 per cent of those aged 30-39.  In real terms this equates to 1,175,000 employees of traditional university age failing to earn enough to buy basic necessities.

Mike Kelly, head of Living Wage at KPMG, said: "Although there are almost 1,000 organisations pledged to pay a Living Wage, far too many UK employees are stuck in the spiral of low pay. With the cost of living still high the squeeze on household finances remains acute - meaning that the reality for many is that they are forced to live hand to mouth.  Inflation may be easing, but unless wages rise we will continue to see huge swathes of people caught between the desire to contribute to society and the inability to afford to do so.  For some time it was easy for businesses to hide behind the argument that increased wages hit their bottom line, but there is ample evidence to suggest the opposite - in the shape of higher retention and higher productivity.  It may not be possible for every business, but it is certainly not impossible to explore the feasibility of paying a Living Wage."

This year's research also revealed that during October 2014 almost three times as many people earning less than the Living Wage (29 per cent) reported that their household finances worsened over the month, compared with just 10 per cent who saw an improvement.  The net effect has seen demand for unsecured credit rising, with twice as many people earning below the Living Wage (18 per cent) reporting an increase in their need to borrow, compared with just 9 per cent who signalled a reduction.

This pressure on finances is also something many people believe will last beyond the short term.  About 35 per cent of those earning less than the Living Wage expect to see household finances worsen between now and November 2015.  Twenty-two per cent also report fears over job security - a figure that has remained unchanged despite improvements to the wider economy.

The Rt Hon Alan Milburn, chair of the Social Mobility and Child Poverty Commission, said: "This research is further proof that more workers are getting stuck in low-paid work with little opportunity for progression.

"It is welcome that the number of accredited Living Wage firms has increased.  But far more needs to be done to help millions of people move from low pay to living pay. Employers and government both have a key role to play. With the right leadership Britain can become a Living Wage country over the next decade."

The report has been released during Living Wage week when a rise to the rate has also been announced.