FM firms need to 'step up' and pay Living Wage 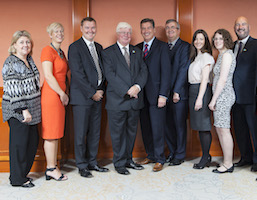 Richard Sykes, CEO at ISS Facilities Services, has called for FM organisations to 'step up to the challenge' and pay the Living Wage to employees.

"We can make a huge difference to people's lives," said Sykes.

"When we opened the Sunborn hotel in London, I found that it was one of the only hotels in the UK to pay the Living Wage.

"We can't just brush this under the carpet as an industry. We need to make sure customers and businesses are more aware of the benefits (of paying the Living Wage)."

Moore said: "I want to see the Living Wage become the norm. It should be what successful, sustainable businesses do."

In addition to ISS, the group is composed of Facilicom, Not Just Cleaning, Channel 4, the British Institute of Facilities Management, the Business Services Association and the Building Futures Group.

Rhys Moore continued: "This is a huge moment for the Living Wage Foundation and we are delighted to welcome Richard to chair a fantastic leadership group with real influence and insight to service industries such as FM.

"Including their expertise to support and create this programme for service providers is a great step forward; it is demonstration of their commitment to improving conditions for some of the lowest paid across the UK.

"The best employers are voluntarily signing up to pay the Living Wage now. The Living Wage is a robust calculation that reflects the real cost of living, rewarding a hard day's work with a fair day's pay.  Service providers play a key role in bringing the Living Wage to many other industries."