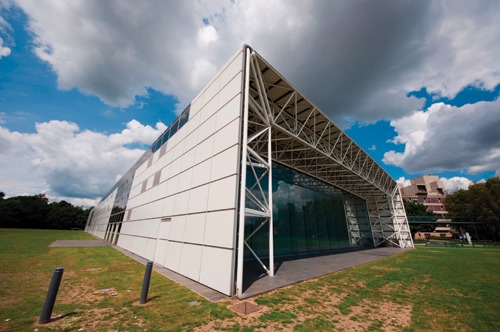 BIFM East Region recently held a breakfast meeting to discuss 'The New Low-carbon Energy Mix and Sizewell C' at the Sainsbury Centre for Visual Arts at the University of East Anglia in Norwich. Rob Farman, the region's deputy chair (North) reports on the facilities mentioned and visited.

As the UK moves from fossil fuels to renewables, a step on the way is to provide non-carbon emitting nuclear power until we fully establish renewables and energy storage.

The event's theme was 'The New Low-carbon Energy Mix and Sizewell C', and as delegates were told, this massive development throws open some splendid FM opportunities.

Tom McGarry, who has a background in consultation on construction developments with several companies, has been head of communications for Sizewell C at EDF Energy since 2010. He explained how government policy recognises that there is a looming energy gap in the UK, as up to 40 per cent of Britain's coal, gas and nuclear power stations come to the end of their operating lives by the late 2020s.

It is a key challenge to replace this generation capacity with secure, low-carbon technologies. The Climate Change Act 2008 committed the UK to an 80 per cent reduction in carbon dioxide (CO2) emissions by 2050 (on 1990 levels).

Renewables will be a vital part of this mix, but these still need efficient, large-scale energy storage to be developed.

As the main political parties are agreed on the need for new nuclear power, the government is able to take action supporting the building of new nuclear power stations to provide a secure, low-carbon base load of electricity. Sizewell C could provide 3.2 gigawatts (GW); Sizewell B now generates 1.2GW, 3 per cent of the UK's electricity, which has avoided 108 million tonnes of CO2 since it began operating in 1995.

The Secretary of State for Energy & Climate Change will be responsible for granting development consent for Sizewell C. An extensive consultation process is underway, with 1,300 responses received during the first stage, which was completed in February 2013. Sizewell is within the Suffolk Coast & Heaths Area of Outstanding Natural Beauty (AONB) and a huge amount of work is being undertaken to assess the potential environmental impact of the project and the mitigation measures that could be adopted.

The construction of Sizewell C will require 5,600 workers at peak during the seven-to-nine-year construction phase. A third of these will be home-based within 90 minutes' drive and the remainder accommodated locally.

Minimising traffic on country roads will require park-and-ride facilities to the north and south of the development site, which would significantly reduce the amount of commuter traffic on local roads during the peak years of construction.

To attract good workers who will be drawn to other potential major infrastructure projects, such as HS2, a high-quality accommodation campus will be required for non-home based workers. A jetty will be built to receive major components by sea, and, possibly, a temporary extension of the Saxmundham to Leiston railway line could be routed into the construction site to deliver freight.

FM Opportunities Sizewell B engaged 3,000 British firms - a quarter of these from East Anglia. Only 20 per cent of the Sizewell C construction site will be nuclear. The associated development sites will also have to be built and maintained (including the park-and-ride facilities, accommodation campus and offices).

The project will require a high proportion of skilled workers. There are considerable opportunities for jobs and contracts - including in FM.

The event concluded with a visit to the Sainsbury Centre's world-renowned art collection and a look behind the scenes of one of the best public art museums in Britain. The Sainsbury Centre is home to the School of Art History and World Art Studies, one of the top two in the UK, and was one of six finalists in Museum of the Year 2014.

Eyes having been opened to some wonderful FM business opportunities, dawn had broken giving a view through the hangar door-sized Modern Life Café windows to a Henry Moore masterpiece.

The Sainsburys became friends with young unknown artists such as Jacob Epstein, Lucian Freud, Francis Bacon, and Henry Moore, whose Mother And Child sculpture in Green Hornton stone was their first purchase. Allowing themselves £1,000 a year, they bought objects from across the world and across millennia, some tiny and some huge. The collection includes works by other major artists such as Pablo Picasso, Edgar Degas and Amedeo Modigliani.

In 1973, Sir Robert and Lady Lisa donated the collection to the university and worked extensively with Norman Foster in the first 10 years of his career to develop a building with the largest (at the time) unsupported roof in the world with minimally obtrusive temperature and humidity control and subdued, greys internally so that the colour all came from the collection. It was Foster's first public building and he had taken some of his ideas from warehouse design in the US, which he subsequently developed and refined in his later buildings.

Foremost in his mind were clear sight lines and, only recently the blinds at the east end have been changed and respond to natural light levels to control the amount of light the art is exposed to. When at least partially open, the view over the grass to The Broad and surrounding woodland is like an Impressionist painting.

Johnson said the building went underground to the east to provide offices that enjoyed the vista just described and a major exhibition space, such as for "Masterpieces from East Anglia" for the university's 50th anniversary in 2013.

At the time of our event, the centre was hosting 'Reality', curated by artist Chris Stevens, which includes his own work featuring young men and horses, Lucian Freud's nude Standing By The Rags, and Alan Macdonald's two intriguing paintings in the style of earlier centuries called Spam Dragon and The Candy Man, captioned with Kate Bush's line "He's here again, the man with the child in his eyes".

The shop was moved up to the ground floor and was remodelled with the reception area in 2013 to a circular layout.

Descending the spiral staircase - there is a platform for wheelchairs, which presents some FM challenges - to the underground area, Johnson said the corridor leading to the far end had been deliberately made narrow to give visitors an impression of being 'closed in' before emerging into light. Again, maintaining sight lines - including minimalist safety marking on glass - had been important.

After a walk down a long corridor, we returned to the Reality Exhibition. Eyes were now opened to the huge amount of work that goes on behind the scenes of such an important building. The Sainsbury Centre has a tremendous outreach programme, with events planned for each season and short introductory courses to art history and archaeology.