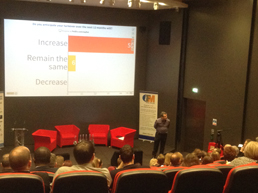 The biggest obstacle facilities management faces over the next year is the shortage of skilled staff, according to a live poll of facilities managers at a conference in London this morning.

The second biggest barrier - according to a ballot of more than 100 influential people in the profession gathered at the Workplace Futures conference - was competition in the market, followed by the state of the economy and recruiting and retraining staff.

Forty-seven delegates said that over the next 12 months they planned to increase their workforce compared with only 15 who said they would merely maintain it. One delegate said: "I would look for people in other sectors [to fill the skills gap in our company]."

Despite this, the confidence in the profession is at a high, with most delegates describing the current state of FM as "positive". One said: "There is so much going on in the sector. About four or five years ago there was no money [to do things in the profession]."

Another delegate added: 'It's very positive, but there is a lot of risk and opportunity out there... there is a high risk of people over-committing and over-promising."

Fifty-two FMs voted that they expected turnover in their businesses to increase over the next 12 months, compared with only six who thought it would decrease and another six who feel it will remain the same.

The conference continues this afternoon at the Siemens Crystal building in London's Docklands.