Parliament to flee to QEII centre as Palace sinks 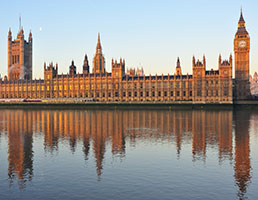 MPs and peers are set to move from the Palace of Westminster to the Queen Elizabeth II Conference Centre when the Houses of Parliament undergo essential renovation, according to a news report.

The Independent on Sunday reported that the conference centre, about a minute's walk from the Houses of Parliament, was likely to become Parliament's temporary home when the palace is refurbished.

The report says the coalition had shelved the idea of selling the building, which has hosted several high-profile events such as the Iraq Inquiry, for this reason.

The Speaker of the House of Commons, John Bercow, recently warned that the palace, which is slowly sinking into the River Thames, would have to be permanently vacated within 20 years unless extensive work starts soon.

An investigation by the Independent on Sunday reveals that:

Accountants Deloitte, architects HOK and engineers AECOM will soon publish a Parliamentary-commissioned report on the best option for organising the repair works when they start in around 2020.

The Labour Party says it would sell such buildings as the QEII Conference Centre to help pay off the country's debt.