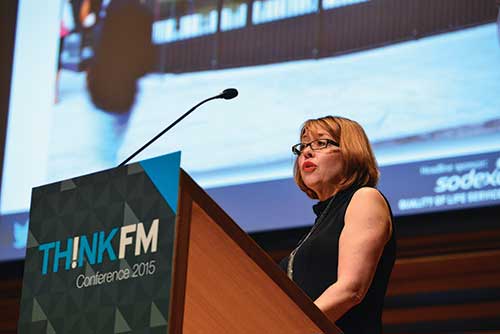 Gaining a competitive edge means focusing ruthlessly on basic organisational efficiencies, so it was remarkable to hear how, until its move from Farringdon to Kings Place in London, The Guardian had no official records management system in place; mounds of paper would surround everyone's desks.

"There was little collaboration back then," recalls Alison Hall, who told the conference how The Guardian had been on a 'fairly dramatic journey' over the past few years.

Today, it's the largest quality news brand in the UK and third-largest English language newspaper website in the world.

The media group's move from Farringdon to Kings Place in 2008 marked a strategic change in direction from daily newspaper to 'significant player in the global media market', a strategy embarked upon at the turn of the Millennium with the launch of Guardian Unlimited, its first website.

The Guardian had been spread over 23 floors and six different buildings, far from conducive to teams creating content across both print and online platforms.

Relocation, then, would allow staff to be brought together.

"We also had to integrate our print and digital teams, introducing new processes, structures, technologies and ways of working," said Hall.

Building studies assessed the amount of time people spent at their desks and the circulation flows of individual teams. In the end, individual office space was cut in half - a significant cultural change, as having your own office had been a mark of status within the organisation.

Said Hall: "The aim of Kings Place was to project a clear sense of identity, emphasising attributes of innovation, transparency, history and interactivity, creating a powerful sense of excitement around what we do."

The building had to be highly adaptable. Internal staircases linking teams were designed in, as were quiet areas, multimedia desks, spaces for spontaneous meetings and cross-functional team areas. Furniture and partitions were designed to accommodate the contraction and expansions of project teams.

Since the move in, the process of evolution has continued.

"When we moved in we had 40 digital developers and engineers, now we have around 150," said Hall. "Today we're competing with the likes of Google for staff."

Guardian Labs, introduced in 2014, have become a significant revenue-generating area, necessitating the second floor at Kings Place being re-engineered to incorporate a pitch room and client presentation area.

Kings Place has won several awards, but the one The Guardian treasures most is the British Council of Offices' 'Test of Time' recognition - for not resting on its laurels since the move.