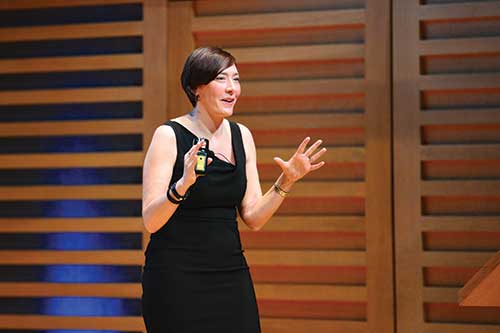 'Return on Emotion and Engagement'

The facilities manager's job has changed from one of maintaining the infrastructure of buildings to one of keeping workers happy, suggested Monica Parker, the founder of workplace strategy firm Hatch.

Why happiness? Because happiness means engaged workers. One in three workers is currently looking for a job, and one in four will leave within a year. The problem? Those that leave are the motivated workers! The cost of this loss of productivity, people moving and companies having to rehire is £106 billion a year to the UK economy. This is why engagement is a topic worth exploring."

Ensuring engaged workers comes down to the four Cs - cause, control, contemplation and community. It's not your corporate cause that's important, it's that of the individual worker. Ninety-four per cent of the 30,000 people profiled in Hatch's database said that the more meaning they had in their job, the more likely they were to be engaged with it.

Organisations shouldn't "vomit up vision statements on to any surface they can find". They should seek to connect the purpose of the business to the individual purpose of each employee.

Control means giving workers as much autonomy over their workplace as is practicable. Studies show that businesses set up in this way actually grow four times faster, and Parker also cited the work of Dr Craig Knight of Exeter University, who found that giving workers greater control of how their workplace is set up are more engaged, and less likely to leave (attrition rates can drop by 30 per cent).

"We have developed a culture of overwork, and that's a problem because it harms our competitive advantage when we don't have time or space to think."

Parker cited an Accenture study of Fortune 500 CEOs that found that they came up with their best ideas in the shower or toilet - "the only socially acceptable places where we can be alone with our time and thoughts".

Community was Parker's fourth rule for engagement. With more and more people living alone, the workplace was an increasingly important component in people's sense of wellbeing, and health.

"Studies show that if you fail to make a primary deep relationship in your life your mortality is as great as if you smoked 15 cigarettes a day."