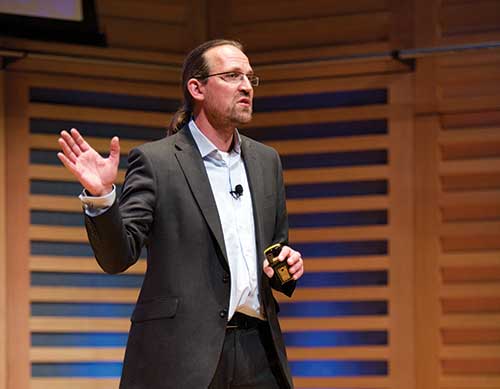 The Rise of the Humans: How to outsmart the digital deluge

"Who among us does not get enough email?" Dave Coplin asked his captive audience.

Coplin, a self-titled chief envisaging officer (one way of becoming CEO, he explained) at technology company Microsoft, has seen technology embed itself firmly into the roots of the workplace.

But, after a quarter of a century working in IT, Coplin believes that technology is a hindrance to productivity, what he calls 'the greatest challenge to our economy'.

"I don't see a great liberating force; I see a prison that constrains how we work.

"The way we work today doesn't work. My job is essentially the future of humanity."

With the UK productivity rate cited to be at its lowest since the Second World War, and ranked sixth out of the countries compromising the G7, Coplin argued that it is the biggest problem organisations currently face.

Coplin said new technology, created by organisations such as his employer, would be used to replicate old ways of working, unless there was a significant culture shift.

"You need a culture that supports transformation," he explained.

"You will not be transformational over email."

Coplin pushed for the workforce to not be enslaved by technology, but to 'stand on the shoulders of digital giants'.

"Technology changes our capability. There's software [currently being developed] which can translate speech in real time."

While perhaps being deliberately provocative in suggesting that this technology eliminates the need for his nine-year-old son to learn languages, Coplin called to see the gift that technology can give the workplace and to 'deliver transformational experiences'.

The audience was treated to a science-fiction view of the future workplace, where holograms were thrown across meeting rooms and onto screens.

Buildings should not just be connected to devices in the building, but connected to human beings, said Coplin.

He described a utopian world where devices check travel and weather updates ahead of an individual's next meeting and advising on the data it finds (software which is in development, beamed Coplin).

The key to 'reinventing the definition of productivity' is spotting patterns in the reams of data that is produced.

"Spotting patterns can be very powerful."

Coplin was an engaging and unorthodox speaker. Perhaps unorthodox is what is required to transform the workplace and to maximise the capabilities of such technology.