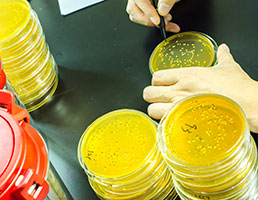 The trust, which runs the Royal Sussex County Hospital in Brighton, was sentenced on 11 June at Lewis Crown Court after a joint investigation by the Health & Safety Executive (HSE) and Sussex Police identified a history of failing to manage the potentially deadly waterborne bug.


It follows the death of vulnerable cancer patient Joan Rayment, 78, from Rottingdean, at the Royal Sussex on 9 November 2011 - eight days after her urine tested positive for the legionella bacteria antigen.


An inquest into Mrs Rayment's death found that she died of natural causes and that by the time of her death the legionella pneumonia appeared to have been successfully treated, however, the inquest found that the infection could have hastened her death.


The court heard that although the trust was monitoring legionella and water temperatures across its various sites at the time of Mrs Rayment's death, between October 2010 and November 2011 a total of 114 positive legionella tests and a further 651 records of water temperatures outside the required parameters were not adequately acted upon.


Matthew Kershaw, Brighton and Sussex University Hospitals NHS Trust chief executive, said: "In 2011 unacceptably high levels of legionella bacteria were found in water samples taken from one of the oldest parts of the Royal Sussex County Hospital, and failings in our water management systems and processes resulted in inadequate corrective actions being undertaken as quickly as they should have been. As soon as these failings came to light we took prompt and decisive action to eliminate the bacteria from the affected showers and these showers were taken out of use until we were absolutely sure there was no further risk of infection.

"We also undertook a full and thorough internal investigation and a detailed review of legionella management across the whole trust which resulted in capital works to the value of £1.7 million; an extensive training programme for staff; and a detailed programme of improvement to ensure all our systems and processes for the regular sampling and testing of water and the tracking of results were fit for purpose. These systems and processes have been tested on multiple occasions and found to be robust and effective.

"Although it was not the cause of her death, it is possible that Mrs Rayment contracted Legionnaires' disease from a shower in our hospital and for that we are extremely sorry and have apologised unreservedly to her next of kin."