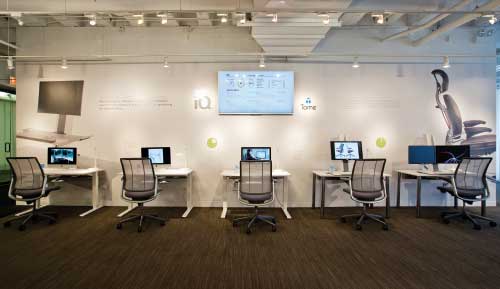 The 'office' as we recognise it today was born in Chicago, and NeoCon - held at the city's Merchandise Mart - has been a key fixture in the world of office future since 1969. Anna King reports

NeoCon is the largest commercial interiors show in America - and arguably the world.

It provides a forum for learning and networking on the grand scale of over a million square feet of exhibition space. In its 47th year, NeoCon featured more than 700 leading exhibitors across key sectors including workplace, healthcare, hospitality, retail, education, public spaces, and government.

What makes NeoCon different from other shows is that most exhibitors occupy their showroom in the enormous Merchandise Mart building all year round, and spruce things up for the three-day event. And whether this marked an upturn in the industry as a whole or was just crowds sheltering from the torrential Chicago rain, the showrooms were packed on every floor.

Six of the best

The scale of the US dictates that the contract furniture market is big business, with turnovers of the larger manufacturers running to billions a year - even those that don't yet touch Europe. But in terms of workplace design and furniture solutions, there is no doubt that Europe still has the edge.

Some of the key trends identified by American observers were 'quiet booths' for concentrated working, standing meeting rooms, the influence of the home in the office and smaller executive offices - all of which have been commonplace in the European and UK markets for years.

Jonathan Hinton, managing director of US-based company Ultrafabrics and a NeoCon regular, noted a much larger presence of European manufacturers, although when it comes to Americans truly implementing innovative ways of working he is more sceptical.

He explained: "The US has started to pay attention to different work styles, but are yet to adopt them. There are some gestures towards it in terms of furniture design and style but this is more of a nod to the design rather than a commitment to changing a work ethic.

One of the most tangible moves in this direction was the plethora of 'pods' on display. The larger manufacturers' items including Steelcase's Brody WorkLounge, Knoll with Pop Up by Antenna Design and Haworth's 'Openest', designed by Patricia Urquiola, were all fine examples of European-style pods/flexible work products, but more often in a slightly heavier aesthetic and beautifully executed.

Chris Fowler, director of design at Bisley did observe some similarities in style and finish.

"Dark woods, particularly American walnut, were very popular finishes. along with saturated blues, greys and greens as accent colours. Tapered legs were everywhere whether it is on tables, chairs or storage units. I would go as far to say that there seems to be a common appreciation in the US and European markets of what represents the latest design trends or simply an agreement of good taste."

What is very clear is that everyone is making everything - a customer can go to their favoured brand to fulfil all their requirements from chairs, desks to storage, which means brands, design credential and service levels are becoming the key differentiators in the marketplace.

The true innovation and step forward in terms of workplace solutions isn't coming from the design of the furniture itself, rather the intelligence that is being integrated with it. This was an area that was brought to the fore by ergonomics company Humanscale, which unveiled OfficeIQ - created in collaboration with tech company Tome.

The objective of OfficeIQ is to ensure the health and wellbeing of office workers, through measuring movement, sitting, standing, calorific expenditure or time spent away from one's desk.

OfficeIQ is anonymous, no person's data is being collected or reviewed. Instead, it gives FMs a big-picture view of how the office is being used.

"It is collecting data (about how the office is being used), but not in a Big Brother creepy way. If you have an office with 1,000 workstations, say, it will give you a percentage of time of how those desks and chairs are being used," said Chris Gibson, Humanscale's vice-president of marketing.

And OfficeIQ provides encouragement as well as tracking and is powerful for the person using it and the company that employs that individual. It potentially 'gamifies' health in the office, creating a fun experience for the user while providing a wealth of information for the company.