Notes from a continental convention 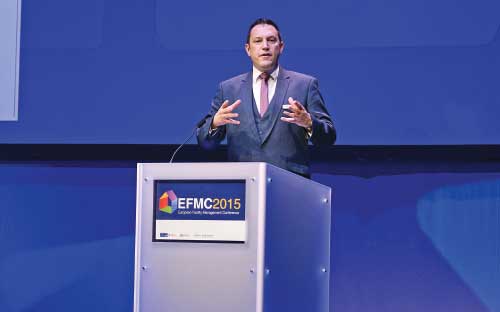 Glasgow hosted a grand tour of FM practice across Europe - as this year's EFMC event surveyed everything from the burning question of energy management to boosting airport washroom experiences. Martin Read reports

The European FM Conference - EFMC - is run annually by EuroFM, an organisation comprising representatives of national FM membership organisations from across the Continent and dedicated to research and education concerning all aspects of facilities management.

EFMC has the support of IFMA and BIFM - a founding partner of EuroFM - with the chief executives of both institutes present in Glasgow to take part in this year's proceedings.

EFMC is certainly no ordinary conference. Aside from a handful of plenary sessions, it comprises two principal content streams - one a business conference, the other a research symposium. Each runs alongside the other, each with two parallel sessions. The upshot is that any single attendee can only get to one of four concurrent sessions. Accordingly, what you find here represents just a snapshot of the comment and conversation from around the halls.

Barbara Cummins, director of heritage management at Historic Scotland, kicked off the event by explaining the work her organisation does on the 345 iconic sites in its care.

"We're not dealing with standard building types," said Cummins. "Air and watertightness are not necessarily possible or indeed even desirable for us."

Historic Scotland is the UK's biggest employer of stonemasons and has recruited 58 building skills apprentices over the past five years, thus "ensuring ongoing succession planning in supporting traditional skills".

Historic Scotland's work has some surprising facets. A few properties need to be closed occasionally on health and safety grounds due to high winds, while drones are increasingly used for maintenance surveys. The control of biological growth on stone and the nefarious activities of burrowing animals also feature prominently on the agenda.

Customers, said Kidd, are increasingly sold on the concept of integrated FM service deals and were in general starting to demand more detail on how service providers are structuring and developing deals.

"It's much more than just KPIs," said Kidd. "Clients are interested in the approach we are taking to the design of our service structure. Increasingly, it's about how we design and build in service quality. Have we understood the client as a customer? How will we as an employer engage with our own employees to ensure that they are performing [to agreed levels]? Have we made promises to our customers that we haven't kept? It's a far more complicated picture than perhaps it has been historically."

On the hot FM topic of employee engagement, Kidd commented on what he saw as a need for strong leadership within the FM workforce.

"Everybody wants to be empowered, to do a great job," he said. "Purpose is an essential component in high performance. Attitude, behaviour, commitment and ultimately quality are outcomes of having sound and robust people practice - and for that, leadership is the enabler."

Lord Rupert Redesdale was on hand to reiterate his call for more investment by organisations in their energy management professionals and a greater awareness of the work that they do. Redesdale told his audience that he believes energy brownouts - intentional reductions in voltage imposed to reduce load and prevent a power outage - remain likely in the UK as a result of the vanishingly small gap between energy supply and demand.

Redesdale also believes energy management is a subsidiary discipline within FM and that, just as with FM, there are major concerns about the impending reduction in specialist practitioners.

It was all too easy for organisations to look at the current work of energy managers and become complacent, he said.

"Because energy managers are routinely introducing small energy-saving measures, what management sees are bills remaining pretty static and energy usage that appears to be under control." This, Redesdale suggested, hid the underlying trajectory of fuel costs and was a "false indicator" of the scale of the problem facing organisations.

During the event, a new international standard series for facilities management was formally approved to proceed into development by the International Organisation for Standardisation (ISO). ISO 41000, a 'management system standard' for facilities management, represents, according to the British Standards Institute Stan Mitchell, a pivotal moment in the potential for such standards to boost the profession.

"We now have approval to create this standard and I honestly believe it is probably the biggest thing we can collectively do to promote the status and professionalism of FM," said Mitchell.

Energy - no two countries the same

"Pricing systems differ in different countries," he told the conference. "In some countries you only pay peak prices on peak load, whereas others price things differently. Yet customers somehow want integrated solution across 20 or 30 countries."

Innovation in supply price can work both ways, said Kulka. "In peak times when energy is very expensive, clients might use the higher base load to feed back energy into the grid and thus be paid for it."

As well as suggesting that "25-30 per cent of every utility bill is wrong", Kulka spoke about how the growing demand from clients to deploy an energy source as close as possible to its intended use, in tandem with the growth in renewables, "is changing the paradigm of energy procurement".

On arrival at an airport, 60 per cent of men and 40 per cent of women make straight for the toilets - thus revealed Wolfgang Haller, head of infrastructural building management at Munich Airport, in an illuminating case study on customer experience.

The airport, the first in Europe to be awarded five-star status by the air travel rating organisation Skytrax, has moved from having a fixed number of washroom cleaning sessions to a number determined by its local FMs. Cleaning on demand has meant the total number of cleaning visits has been reduced, with cleaning better linked to particular daily 'hot spots'.

What's more, cleaning can now be done on request - a passenger using the washroom can now request a clean using a touch screen. If you as a visitor are happy, you tap a smiley face. If you're unhappy, you tap a grumpy one - and are allowed to specify just what was wrong with your experience of the washroom.

Naturally, discussion centred on the extent to which this innovation in customer interaction can be further developed, with (for example) users letting the system know when cotton towel dispensers were empty, for example.

FM in the Netherlands 'is hot'

Ron van der Weerd, chairman of EuroFM, is also dean of the School of Facility Management at the Hanze University of Applied Sciences,  Groningen Netherlands - which currently has 1,200 students studying FM.

"Every year we welcome another 300 to 350 new students," he told delegates.

Contrary to the concerns of many expressed in a session focused on the future outlook for the profession - that FM remains stubbornly outside of most youngsters' mainstream career choices - van der Weerd explained how "we in the Netherlands don't have any problem with the image of FM. FM is hot. Fifty per cent of our students are male, 50 per cent female. And in general, the females are achieving a lot better than the males."

Dutch students attending the conference confirmed their compatriot's enthusiasm for the profession. Clearly there is something in the Dutch practice of FM that others across the continent can learn from.

EFMC 2015 ended with an intriguing joint session in which EuroFM's panel of research specialists took to the stage to comment on the conference's proceedings. Plenty of strong research material is presented across the two days of EFMC, but audience and organisers alike appeared united in their view that more should be done to marry the research content to the business conference sessions. In particular, more examples of practical application of research was discussed.

Peter Prischl of Reality Consult in Austria said the event had not seen enough 'true interaction' between academic and practical.

"I would like to see more academics go to practical sessions and challenge what they see, and of course other way around. I believe we need more structured interaction between the academic and business streams."

The round of applause that greeted this was followed by broad agreement that there were several missed opportunities to share ideas between the two streams. The joint chair of EFMC's research symposium, Ilfryn Price of Sheffield Business School, agreed there was scope for experimenting with the event's format - but that interest in research in FM was on the rise and that this year's EFMC had seen the presentation of a host of challenging papers.

It all signalled an appetite for a new approach for the 2016 EFMC conference, scheduled to take place in Milan.