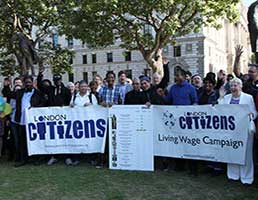 Living Wage: how many firms will adopt it?

The HM Revenue and Customs (HMRC) and Department for the Environment Food and Rural Affairs (DEFRA) are the government departments not paying staff the Living Wage, according to a league table compiled by a community organising body.

Citizens UK carried out an investigation by interviewing cleaners, security guards and others and asking how much they were paid an hour (see table below).

Cleaners from a range of Whitehall departments, and their supporters from Citizens UK member churches, mosques, synagogues, schools and colleges in London, gathered together in Parliament Square on Tuesday 21st July, to unveil the updated Living Wage Whitehall League Table.

HMRC and DEFRA were found out to be paying staff only £6.50 per hour - more than £3 less than the London Living Wage, which is currently £9.15 an hour.

Other departments such as DECC are accredited Living Wage employers, ensuring all their staff, including sub-contracted workers like cleaners and security staff, are paid at a rate that is calculated to make sure they earn enough to live on.

Citizens UK member, Canon Dr Angus Ritchie of St Peter's Bethnal Green, said: "We welcome the new higher minimum wage rate that the chancellor announced in the Budget. It's a huge step, but we have been working with the Mayor of London for seven years and there's a London Living Wage rate that recognises the higher costs in the capital. That rate is currently £9.15 per hour. The changes announced to the minimum wage will not help the 586,000 Londoners for whom even the 2020 rate announced today would not be enough to live on now.

"Included in those 586,000 are those colleagues of George Osborne and his Cabinet ministers who clean the corridors of power."

The gathered protestors then walked to some of the worst offending departments, where they handed in letters to the ministers as well as books of testimony, featuring real-life stories of the cleaners from the department that detail the struggles of living on low pay in the capital.

Whitehall cleaner Maria said: "Life on low pay is very difficult. I share a one-bedroom flat with my daughter. Everything is expensive, especially rent and a travelcard. I miss spending time with my family and friends. Low pay makes it hard."

Another Whitehall cleaner said: "I work two jobs but still life is very hard. I leave home at 4am and get back at around 9pm. I work six days a week, but sometimes, if we need more money because of a high bill, then I will work seven days. I think if you can work, you should work hard. I am lucky, I have my health so I can work, some people can't, and they are the people who need help from the government."

Guy Stallard, head of facilities at KPMG - a Living Wage provider told FM World that the results "surprised" him. He said: "This is personally surprising to me because Boris Johnson announced the rise [in the Living Wage] and government departments are seen not to be paying it." 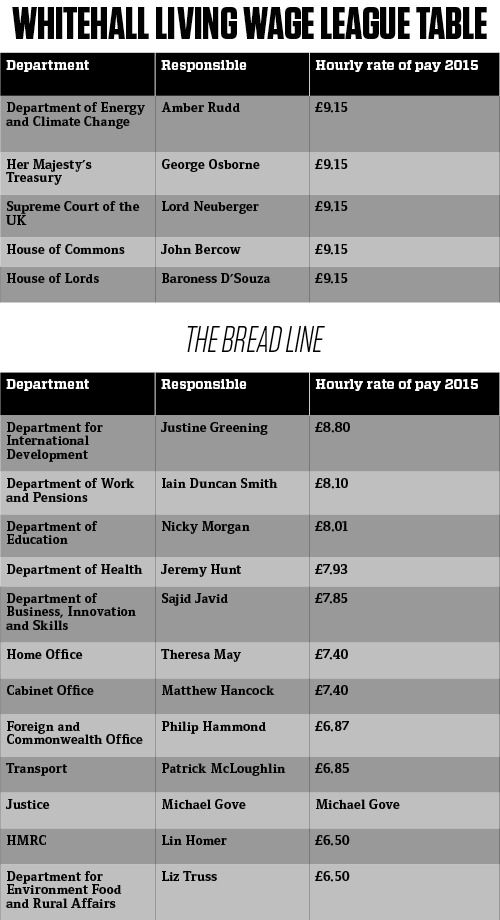