HMRC has 'no involvement' over wages of its cleaners 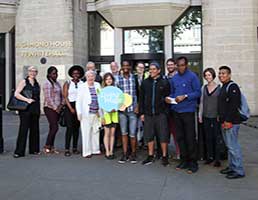 Living Wage: how many firms will adopt it?

The government departments which are paying cleaning staff only £6.50 per hour - more than £3 below the London Living Wage - have said they have "no involvement" over how much staff get paid.

This week community organisation Citizens UK published a Whitehall League Table showing how much government departments were paying cleaners, security guards and others in what is termed as low paid work.

Her Majesty's Revenue and Customs (HMRC) and the Department for Environment, Food and Rural Affairs (DEFRA) were found out to be paying staff only £6.50 per hour - more than £3 less than the London Living Wage, which is currently £9.15 an hour.

Other departments, such as the Department for Energy and Climate Change (DECC), are accredited Living Wage employers, ensuring all their staff, including sub-contracted workers like cleaners and security staff, are paid at a rate that is calculated to make sure they earn enough to live on.

When approached, an HMRC spokesman told FM World: "HMRC greatly appreciates the work cleaning staff do in our buildings and all cleaning staff are paid above the National Minimum Wage. As cleaning staff are employed by an external contractor who set the terms and conditions of their employment, HMRC has no involvement in this process over their pay."

But a spokeswoman for Citizens UK said this was akin to "passing the buck" and showed a lack of leadership and disconnect amongst government departments.

"Accredited Living Wage employers have the same challenges as government departments but they are in charge of how their contracts are tendered," she told FM World.

She added: "We would challenge that statement [by HMRC] as they hold the power to negotiate whether a wage should be set as the National Minimum Wage or the London Living Wage.

"Passing the buck does not show leadership nor does it show an understanding of the realities of working on low pay in London."

A Defra spokesman also told FM World: "Environment Secretary Elizabeth Truss has already set out her commitment to making DEFRA a Living Wage employer and we are working with the relevant contractors on how to deliver that. Government encourages contractors to commit to paying a living wage and of course insists employers pay at least the National Minimum Wage.

"Government will always award contracts on the basis of the best value for money for the taxpayer. Paying the living wage is a decision that must be taken by the contractor. Creating a blanket requirement that all contractors must pay the living wage could be burdensome for business."