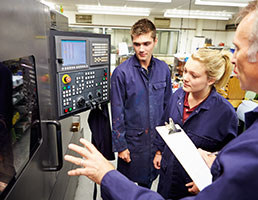 From 1 September 2015, all bids for government contracts worth more than £10 million must demonstrate "a clear commitment to apprenticeships".

In particular, employers' bids will be reviewed in line with best practice for the number of apprentices that they expect to support.

Other measures include an apprenticeship levy. Under the proposed approach employers who put in funds will have direct spending power over it. Levy systems already operate in more than 50 countries, including the Netherlands, Denmark and South Korea, to ensure that every larger company plays its part in investing in the future generation of apprenticeships.

This week employers across the country will be asked for their views on the introduction of an apprenticeship levy - set to be introduced in 2017 and designed to increase investment in training and apprenticeships.

There will also be a 5% Club - a business-led network of employers who commit to getting at least 5 per cent of their workforce on apprenticeships and training schemes within five years.

Cameron said: "The greatest asset any employer has is their workforce. And by investing in them, they are investing in the success and future of their business. As a one nation government, we are committed to supporting three million quality apprenticeships over the next five years - to help strengthen our economy, deliver the skills that employers need and give millions more hardworking people financial security and a brighter future."

He said the government would publish new 'industry standards' so that apprentices have the skills that companies need.

The measures are a part of the government's pledge to support three million apprenticeships by 2020.