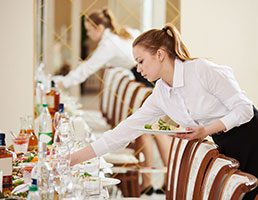 Taking up the floor: Exploring the impact of the National Living Wage on employers

Support services, especially the hospitality sector, will have the largest wage bill as a result of enacting the National Living Wage (NLW), according to research.

A study by think tank the Resolution Foundation reveals that 2.7 million employees would benefit from the increase announced by George Osborne in the summer Budget. Of these, 46 per cent work in just three high-level industries: wholesale and retail; hospitality (accommodation and food services); and support services.

Nearly every second employee in hospitality (48 per cent) would be affected by the introduction of the National Living Wage, which will be introduced at £7.20 next April, rising to £9 an hour by 2020. Support services (38 per cent of those affected in this industry work in cleaning) and retail face larger wage bill increases than most sectors - by far the biggest increase is expected to be in hospitality at 3.4 per cent in 2020.

As low-paying sectors, the bite associated with the National Minimum Wage (NMW) in these industries is already much higher than in the rest of the economy, says the research.

They will rise further in the coming years. For example, the NMW had a bite of 74 per cent in retail in 2014; that is expected to rise to 88 per cent by 2020. A similar increase is likely in support services (from 72 per cent in 2014 to 85 per cent). Yet even after these increases the pressures in retail and support services fall short of the one prevailing in hospitality in 2014 (93 per cent).

By 2020, the bite in hospitality is set to rise beyond 100 per cent, meaning that (at least) half the employees in the industry will be paid the NLW or less, says the study.