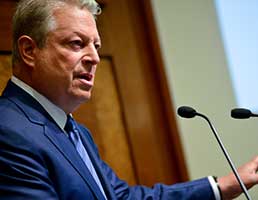 Al Gore, former US vice-president and renowned environmentalist, has questioned the UK government's commitment to tackling climate change, saying he is "puzzled" by recent decisions to scrap a number of pro-climate policies, including those aimed at green buildings.

Speaking at a Green Alliance and CBI event on the upcoming Paris climate negotiations on Tuesday morning, Gore listed policies that the government has scrapped.

Cancellation of the zero-carbon new homes and buildings policies and the Green Deal headed his list.

The document titled Fixing The Foundations: Creating A More Prosperous Nation, launched by Sajid Javid, Secretary of State for Business, two days after the Summer Budget, states that "the government does not intend to proceed with the zero-carbon Allowable Solutions carbon offsetting scheme, or the proposed 2016 increase in on-site energy efficiency standards".

The zero-carbon buildings policy was first announced in 2007. Both the 2016 zero-carbon homes target and the 2019 target for non-domestic zero carbon buildings will be dropped, and there will be no changes to Part L in any form during 2016, says the document.

Gore asked: "Will the United Kingdom change? Will it provide the leadership that its friends around the world have always admired?"

John Alker, director of policy and communications at the UK Green Building Council, said: "Make no mistake, Al Gore has issued a major challenge on UK climate leadership ahead of the crunch talks in Paris and it is essential that his rallying cry is heard in Treasury.

"However, the responsibility doesn't rest solely with government. The voice of progressive business must also be heard, demonstrating why policy certainty is so important and how companies are making strides to drive down carbon in their own investments and operations."