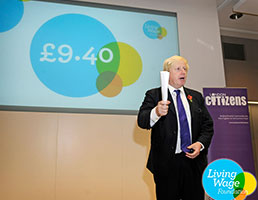 The Living Wage Foundation has announced its new Living Wage rates for London and the UK.

Accredited Living Wage employers - of which there are now more than 2,000, according to the foundation - will pay their staff a minimum of £8.25 an hour, rising from the previous rate of £7.85. The national minimum wage is currently £6.70 an hour, although this will rise to £7.20 an hour for all employees over 25 years old from April next year.

The London Living Wage, a separate rate weighted for those working in the capital, has risen by 25p to £9.40 an hour.

The wages of the 68,000 staff who work with the accredited employers will rise to the new rates, which are calculated independently and based on the cost of living, within the next six months.

Sarah Vero, director at the Living Wage Foundation, said: "Today we are celebrating those 2,000 responsible businesses that are voluntarily paying the Living Wage to their staff. These employers are not waiting for government to tell them what to do; their actions are helping to end the injustice that is in-work poverty in the UK now.

"The Living Wage campaign is growing at pace. Today more UK businesses are announcing their Living Wage accreditation including national retailer Richer Sounds, Lloyds Banking Group, and Unilever. They join a growing list of organisations ranging from FTSE 100 companies to independent businesses, SMEs and third-sector employers who all share our belief that work should be the surest way out of poverty. The Living Wage is good for people and for business."