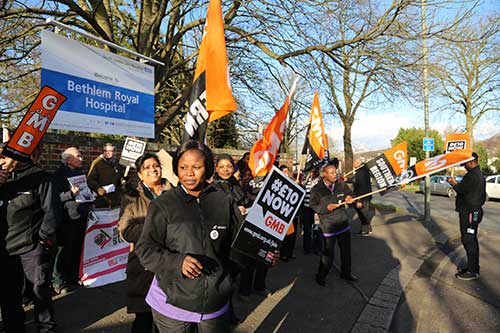 Cleaners and hostesses at South London and Maudsley NHS Trust are planning to strike over the right to earn a living wage.

According to a statement from the GMB union, 175 domestics and hostesses employed by private contractor Aramark - working across the Maudsley, Lambeth, Bethlem and Ladywell sites of South London and Maudsley Trust - will be balloted by the union in a continuing dispute for £10 per hour, sick pay and shift allowances.

Nadine Houghton, GMB regional organiser, said: "It's unfortunate that we have been forced to ask our members whether or not they are prepared to strike, but we have consistently told Aramark that our members provide a frontline service in a mental health trust within London, and as such they deserve to be paid a genuine living wage of £10 per hour, full sick pay and proper shift allowances.

"Our members are working around many vulnerable individuals. Sometimes they are verbally and even physically attacked, and yet many of them are unable to take sick leave as they are not paid for this. Some of them also receive no extra pay for working weekends and Bank Holidays. They have rejected the offer that Aramark made to them as it went nowhere near satisfying the members' demands."

Houghton added that the campaign for a living wage was "an essential one", but said: "George Osborne is attempting to rewrite the rules on the living wage, claiming that £7.20 per hour will be a living wage come April. This is smoke and mirrors. It will now be down to working people to make their case for a genuine living wage, which the GMB calculates to be at least £10 per hour in London".

An Aramark spokesman said: "We believe a fair and comprehensive offer has been made. It is disappointing that union representatives have chosen to reject it, but we remain hopeful that a mutually agreeable resolution can be reached."