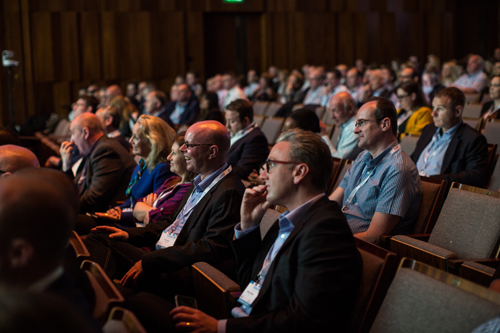 Eugenio Proto - University of Warwick: The pursuit of happiness and productivity

If ever an event served to illustrate facilities management's steady expansion out from the supply of building services to the supply of whatever boosts business performance, ThinkFM 2016 was it. The FM World team was on hand to report.

ThinkFM 2016, the BIFM's annual conference, had 'ThinkFM: Think Productivity' as its tag line, and speakers chosen for their ability to explain how they'd boosted performance in their organisations or provide new views on the debate.

Eugenio Proto’s analysis of research pointed to the inescapable conclusion that workers' happiness should matter to organisations not just for moral reasons - if happiness boosts productivity, said the University of Warwick professor, then it also boosts profit. And the introduction of very inexpensive policies can have significant results on performance.

Keynote speaker Mark Priestley used the high-profile example of McLaren's Formula One team to show how important it is to focus on connecting and engaging your workforce to unlock latent potential in your business, which in turn leads to productivity. Bridging the gap between the two McLaren teams - the one at the races and the one at the factory - has boosted performance in all manner of ways (though F1 followers would point out that recent McLaren performance is a function of a subsequent engine supply deal, and not reflective of the team's interconnected spirit).

Katie Ledger touched on the thorny issue of personality and ego in teams, with the audience expanding the discussion to include the inherently adversarial difficulties involved in client/supplier relationships. Jackie Cupper of GlaxoSmithKline (GSK) spoke about how a user survey had flagged a massive disparity in the way services were delivered across GSK's disparate users, and how this was readdressed.

This theme of engagement and its effect on productivity cropped up repeatedly, with National Grid's Simon Carter explaining how a rethought property team structure meant more authentic connections with his organisation's HR department.

But it was in the launch of The Stoddart Review, which seeks to help business leaders fully understand the contribution of the workplace to organisational performance, that the conference really left its mark. Using Leesman Index data to show how just 54 per cent of UK employees agree that their workplace enables them to work productively, it's a healthy response to an unhealthy statistic. Introduced by the late Chris Stoddart's colleague Polly Plunket-Checkemian, ThinkFM 2016 was the perfect platform to launch a groundbreaking project highlighting how FM helps provide successful solutions to business.

Read reports on each speaker by clicking through on the links above.