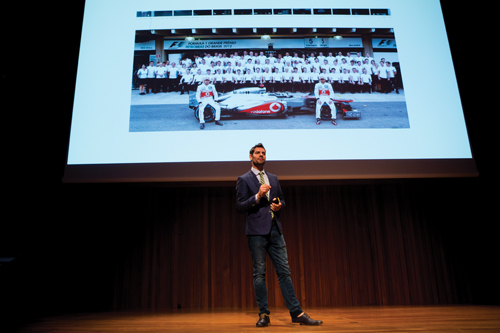 Mark Priestley - Formula One and Formula E broadcaster and writer

Former McLaren F1 mechanic Mark Priestley kicked off proceedings by explaining how marginal gains, and how they are sourced, has boosted the team's productivity.

Cost pressures following the banning of tobacco advertising in Formula One saw the Woking-based McLaren team, under CEO Ron Dennis, focusing on its carefully developed reputation for efficiency. One key component in this efficiency drive was how the race and factory teams - until this point two quite different operations - integrated with each other.

When a broken wishbone component led to a McLaren having an accident, research into the reasons for the component failure led to Priestley appreciating a disconnect between the travelling race team and their factory colleagues in Woking. Rather than fully engaged in the process, many factory workers had no connection to the race team and didn't even watch the race on TV.

The situation had to change, so Priestley spoke to Ron Dennis who, it transpired, had no idea of what life was like for people on the shop floor; there was a huge disconnect between both halves of the team.

A monthly forum was introduced at which factory workers got the opportunity to bypass line management and talk directly to senior management about ideas they had for improving processes. From cleaner and caterer through to technician, the forum meant anyone in the team now had a connection to the decision-making process.

Given this new opportunity, ideas started slowly - but soon factory workers realised that this wasn't a gimmick. So if someone had an idea for a revision to a front wing, that could be actioned. Even better, an idea mentioned on a Monday could be up and running on a car by the weekend.

Moreover, whenever an idea that originated from the factory was used by the race team, McLaren then ensured that the individual involved was name-checked in press releases as well as by drivers in post-race conferences.

The result? "The two halves of the team working with each other," said Priestley.

"We managed to tap in to a massive resource which gave us a massive advantage over our competitors."

Today, factory workers come in on a Sunday to watch the race live. A live video link to the garage allows both parts of the race team to celebrate their successes together - so if the team wins, the champagne spraying at the track is replicated in the factory. "There's often a better atmosphere down in the factory than there is at the race," said Priestley.

"We changed the ethos," said Priestley, "and we got everyone thinking about where they fitted in to the process."

In short: McLaren's people, now all equally empowered, have had a positive effect on the team's productivity.