ThinkFM 2016: No bells and whistles: just make it work 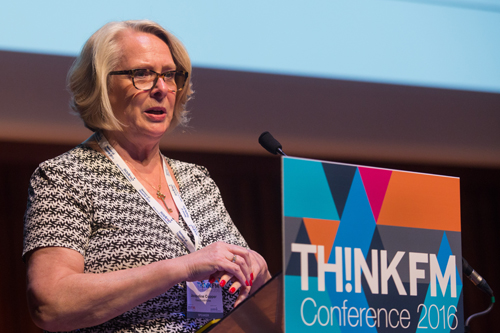 GSK is a household name which, in 2014 alone, produced four billion packs of medication. It is a sector with long lead-in times for investment and R&D; a product takes 15 to 20 years to go from a molecule to the market.

But, said Jackie Cupper, "One thing we weren't doing was helping our own people be productive and feel better".

Historically, customer satisfaction responses at GSK had hinged on "running around on anecdotal 'voice of the customer' (VoCs) on stuff that wasn't really the voice of the customer. We were responding to every query, treating each one with equal importance and for every one we satisfied we probably cheesed off two people. So we hadn't got the balance right."

One problem was that most GSK facilities services were not IT-linked. Cupper's team enlisted Market Force, a firm that dealt with retail organisations to run a customer satisfaction survey.

"The other thing we did was research an article in the Harvard Business Review entitled 'Stop trying to delight your customers'. Its premise? "We don't want bells and whistles - we just want things to work first time. Staff just want clean toilets and bathrooms; putting in a vase of flowers doesn't add anything to why you went in there."

Cupper's team used customer effort scores (CES) to detail the effort people had to expend in engaging with facilities services. They also engaged a PhD analyst who worked on data to draw conclusions and help suggest appropriate actions.

"We eventually persuaded the organisation to let us do a primary survey," said Cupper.

"The gamble I took was that the outputs from that would be such that [agreeing to do] another one would be a slam-dunk."

Another tool, the 'happy or not buttons' of the type you see at airports, were deployed. These garnered some quick point-of-service customer satisfaction data, primarily relating to soft services that weren't online - coffee bar, free tea and coffee, in restaurants, in reception, and in the toilets.

Setting up the two-week survey of 28,000 staff threw up teething problems. There were no free text boxes to enter verbatim comments - "a consequence of us not thinking it through," said Cupper.

"In a regulated environment we typically shun free text boxes in surveys. So we've learnt that one - the next survey goes out internally."

Other data even helped to identify the staff and address problems of those who had the most difficulty engaging with services  - clinicians and those with professional degrees in R&D.

The team was able to study global site improvement plans and service excellence and standardisation plans because one of the things flagged was the massive disparity in services across the global organisation.

There had also been an 81 per cent reduction in preventable service delays relating to parts orders, and the response times within 24 hours shifted from only 11 per cent in January to 76 per cent, and now in the high 80s.

Customers will typically want the basics done right and no more.

Anecdotal evidence is indicative but real data is instructive.