ThinkFM 2016: Pursuit of happiness and productivity 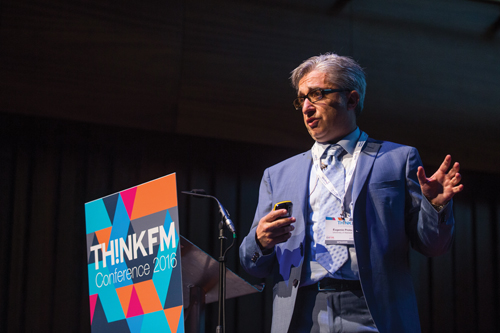 Eugenio Proto, Associate Professor at the University of Warwick

Some firms say they care about the well-being and 'happiness' of their employees. hype, or scientific good sense?

"Happiness matters not just for moral reasons, but financial reasons too"

Eugenio Proto, associate professor of Economics at the University of Warwick, and research associate at the Centre for Competitive Advantage in the Global Economy, began by asking the basic question - does happiness make employees more motivated? Or does it distract employees and create careless, superficial behaviour?

Proto referred to the view of Lara Harding, people programmes manager at Google: "At Google, we know that health, family and well-being are an important aspect of Googlers' lives. We have also noticed that employees who are happy demonstrate increased motivation."

Proto showed empirical evidence from UK research suggesting a correlation between the level of an individual's happiness and their income; individuals with a higher subjective well-being usually have higher income.

Further Wall Street Journal research indicates that companies rated as "Good places to work" on employer review site Glassdoor have greater financial returns than the S&P 500 financial index over a period of years.

Proto outlined a simple experiment conducted by himself, A Oswald, and D Sgroi, published in the Journal Of Labour Economics in 2015. In the experiment, the team showed a TV clip featuring comedian Bill Bailey to participants, while measuring their happiness and productivity before and after.

They found that the level of productivity - as measured by a simple addition test - increased in line with the level of happiness of the participant.

Proto then discussed the impact of 'bad life events' (BLEs), which included a bereavement or a family illness. Unsurprisingly, there was a substantial drop in the happiness of employees who had this experience. But, crucially, this also coincided with a dip in productivity.

In terms of the implications for organisations and wider society, Proto maintained that productivity mattered not just for moral reasons, but also for financial reasons. Any benefits that are cost-free for an organisation should be brought in as default; those with a price tag could still be worthwhile too.

How do we apply these findings and principles at this level of society? Proto encouraged the FM sector to educate firms on the benefits of employee happiness.Productivity-boosting policies can help compensate for the current environment of low labour productivity.

The issue should not be reduced to happiness versus profit, or life satisfaction versus economic growth - both sides can and should move forward together. He also suggested that workplaces experiment with different policies. For example, a firm could initiate short-run 'shocks' to boost happiness quickly. Or, they might opt for longer-term projects, such as improving the working environment, or establishing benefit programmes.