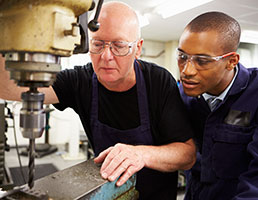 Pressing ahead with the apprenticeship levy is "irresponsible", according to the Chartered Institute for Personnel and Development (CIPD).

The professional body for HR and people development was responding to the government's announcement that it is seeking views on its proposals for a new funding model for apprenticeships - but would launch the levy as planned in April 2017.

Ben Willmott, head of public policy at the CIPD, said: "It is disappointing the government has not taken the opportunity afforded by a new ministerial team - and change to the department responsible for skills policy in the UK - to look again at the apprenticeship levy. The very valid concerns regarding the levy in its current form are wide scale across organisations from the private, public and voluntary sectors and it is irresponsible for the government, particularly in a time of economic uncertainty in the aftermath of the referendum, to simply press ahead with a policy that is not fit for purpose.

"Our research suggests the levy in its present form will undermine efforts to improve the quality of apprenticeships. This is a time where we need to be raising the status of apprenticeships, not pursuing a policy which will have the effect of devaluing the 'apprenticeship brand'.

"In addition, there is the damaging unintended consequence of forcing employers to reduce investment in other areas of equally valuable workforce training and development, and to essentially 're-badge' existing training as apprenticeships in many instances. This 'one-size-fits-all' approach will damage attempts to improve the UK's workplace productivity and will not address the downward trend in employer investment in training in recent years."

In May, various bodies called for the government to delay the levy. Employers' group the Engineering Employers' Federation (EEF), for instance, said research showed that 72 per cent of manufacturers say the levy should be delayed until business and the government are satisfied that "it's fit for purpose".

From 6 April 2017, any employer with a pay bill of more than £3 million a year is required to pay into the fund, which will go towards supporting people to gain skills and experience in a number of sectors, including facilities management. The government has proposed that the employers who will not pay into the levy - some 98 per cent of organisations in England - are to have 90 per cent of the costs of training paid for by government.