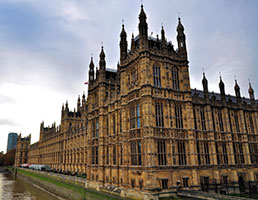 Parliament to flee to QEII centre as Palace sinks

MPs will have to vacate the Palace of Westminster for years so that essential repairs can be done, or face the increasing risk of a 'catastrophic' event, according to a committee of MPs and Peers.

In a report published yesterday, the Joint Committee on the Palace of Westminster has proposed that  all MPs, Peers and staff move out so that a major programme of works, costing £3.9 billion and taking six years, can be carried out.

It proposes that ahead of this, a delivery authority should be established to develop a business case and budget for Parliament's approval, with a detailed preparatory stage to ensure value for money ahead of the start of works in 2020.

The report concludes that the current "patch and mend" approach is unsustainable, and the Palace of Westminster "faces an impending crisis which we cannot responsibly ignore".

It says that there is a growing risk of either a single, catastrophic event, such as a major fire, flooding or gas leak, which would lead to Parliament no longer being able to occupy the Palace.

The Committee concludes that the House of Commons could occupy Richmond House, the Department of Health's current head quarters and the House of Commons' Northern Estate, while the House of Lords could establish a temporary chamber and supporting offices in the Queen Elizabeth II Conference Centre.

The report said: "Much of the M&E plant dates from the mid-20th Century; some of it dates from the Victorian era. Many of the systems reached the projected end of their lifecycles in the 1970s and 1980s. They have been patched up year after year, often with new cables and pipes laid on top of old, and with little knowledge of what the existing services are, where they go, or whether they are still live."

It added that the significant amount of asbestos throughout the Palace added to the complexity, cost and time needed for the work.

The report said: "The challenge of the Restoration and Renewal Programme is immense, but it also offers scope to deliver some significant improvements to the way the Palace works, turning a masterpiece of 19th Century architecture and design into a building that is fit for a 21st Century Parliament."

The programme of repairs will present significant opportunities to engage with small and medium-sized enterprises, the committee also concluded. How apprenticeships and other training schemes could be delivered as part of the restoration programme to provide a lasting legacy of skills, should also be considered, it said.

The Joint Committee was appointed last year to consider a range of options to protect the Palace and to maintain it as a working parliament.

Baroness Stowell of Beeston, co-chairman of the committee, said that this was an increasingly urgent problem.

"We can't put off the decision to act any longer if we are to protect one of the most important and iconic parts of our national heritage," she said. "The next phase of work, to be conducted by the Delivery Authority, will be vital in ensuring that Parliament has a fully costed and tested plan for conducting the work, before being asked to give the final go-ahead for the works to start."

Committee member and Committee spokesperson, Chris Bryant MP, said: "All the evidence points to having to move out of the whole Palace simultaneously. That is the lowest risk, most cost-effective and quickest option."